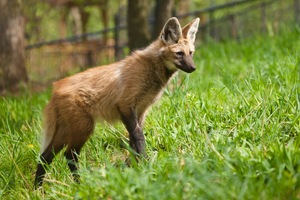 BRIDGEPORT, Conn. – Connecticut’s Beardsley Zoo will celebrate the first birthday of three rare Maned wolf pups (Chrysocyon brachyurus) with a special “Maned Event” for the wolf family and guests on December 27. In remembrance of the late Julia Wasserman’s long-term service to the Zoo’s Board of Directors, and in gratitude for a generous bequest, Zoo Director Gregg Dancho announced that the Zoo will honor her on that day with the naming of the Julia Wasserman Maned Wolf Experience.

The first birthday for Goncarlo, Guapa and Sabana will be marked with cake and hot cocoa for all the Zoo guests, and special educational talks in front of the Maned wolf habitat. The animal care staff will provide special birthday treats and enrichment for the Maned wolves at that time, usually offering great photo opportunities for attendees.

To be held at Connecticut’s Beardsley Zoo, 1875 Noble Avenue, Bridgeport on Thursday, December 27 at noon

The birth of three critically-endangered Maned wolf pups (Chrysocyon brachyurus) took place on December 27, 2017, at Connecticut’s Beardsley Zoo, a first time for this species at the Zoo, and for the state of Connecticut. The number of Maned wolves in the wild is dwindling due to their severely compromised habitat being destroyed by farmers through intense deforestation. In addition, they are threatened by road kill, persecution by humans, and disease due to contact with domestic animals. The development of a Species Survival Plan (SSP) has enabled the breeding of Maned wolves in human care. The goals of the SSP are to maintain a viable, self-serving population in North America, enhance the health and wellbeing of individuals, and promote conservation of this species through education and field conservation initiatives.