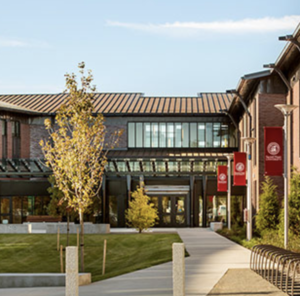 FAIRFIELD, Conn.—Students at Sacred Heart University will have the opportunity to meet with two former congressmen March 26-28 through Congress to Campus, a program that aims to increase young people’s civic literacy and participation.

Run by the Association of Former Members of Congress (FMC), in partnership with the Stennis Center for Public Service, Congress to Campus sends a bipartisan pair of former Congress members to institutions of higher education for two-day visits. There, the former lawmakers conduct classes and interact with students, aiming to promote greater democratic participation.

Voter turnout among people under 30 tends to be much lower than turnout among other age groups. Likewise, trust in members of Congress remains low, according to a 2018 Gallup Poll. Congress to Campus provides an opportunity for young people to meet face-to-face with those who have served—building trust and recognition of the value of public service and civic engagement.

“I want the students to feel a greater sense of respect for what Congress does,” said Gary Rose, chair of SHU’s Department of Government. “Hopefully, they’ll feel more motivated about public service.”

Sacred Heart’s guests will be Robert Weygand, a Democrat from Rhode Island, and Gil Gutknecht, a Republican from Minnesota.

Weygand served in the House of Representatives from 1997 to 2001. Once Rhode Island’s lieutenant governor as well, he is now director of the Master of Public Administration Program at the University of Rhode Island.

Gutknecht was in the House of Representatives from 1995 to 2007. He is now an adviser to several companies including TransparaGov Corporation, a leading developer of software tools designed to bring visual analytic technologies to governmental bodies.

Several of the forthcoming events involving the two congressmen will be hosted by SHU’s Institute for Public Policy. The Institute is directed by Lesley DeNardis, associate professor of political science.

For more information on Congress to Campus, visit https://www.usafmc.org/congress-to-campus/