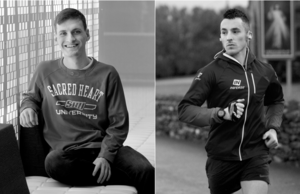 FAIRFIELD, Conn.— Shane Finn, a Sacred Heart University in Dingle adjunct instructor and ultra-athlete, began a 36-day journey on March 29 from the Golden Gate Bridge to the Brooklyn Bridge by foot and bicycle to raise money for people living with spina bifida and hydrocephalus (SBH). The goal of the “American Ultra” is to raise $280,000 for Irish organization Spina Bifida Hydrocephalus Ireland (SBHI).

Finn will meet up with SHU junior nursing student Ryan Litwin on Thursday, May 2, and they will run together to the main campus on Park Avenue in Fairfield where they will be welcomed by the SHU community. Litwin, a cancer survivor, is embarking on a journey of his own across the country this summer to raise money for the Ulman Foundation, an organization that provides a community of support for young adults who are impacted by cancer and their loved ones. The two will join up in solidarity for each other’s mission.

At just 26-years old, he is candid in his preparation of what could be the most taxing physical and mental undertaking of his life. “It’s just you against you,” he says, explaining that his success is dependent on a positive mindset. He is inspired by his cousin Mary who lives with SBH. The two grew up together and share a very special bond.

Prior to spearheading the American Ultra, Finn spent a large portion of his life raising money for SBHI. He dedicates his time to the Irish community, working to garner resources that will aid individuals and families affected by the condition. The $280,000 raised by Finn and his team will impact the future of SBHI and help to change lives of those living with the disability, along with their families and volunteers.

For additional information on Finn’s journey and a link to donate, visit www.shanefinn.com.