SHU Graduates Over 2,200 at Weekend Commencement 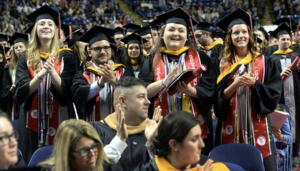 In his opening remarks to undergraduates today, President John J. Petillo, encouraged students to take action and not just sit back and wait for life to unfold. “The barometer of your life well lived goes beyond simply wealth and comfort. Attain them if you can, always remembering you also need to be responsible in using them in service for others,” Petillo said. “Infuse your life with action. Don’t simply wait for it to happen. Be insistently curious; curious about who you are, what you are becoming, and why.”

In his speech, Hamilton provided students with four pieces of advice. He stressed the importance of serving others. “It has taken me years to learn that you are never going to get happiness by serving yourself. It is almost as if we are engineered in reverse – by seeking things for yourself, you are guaranteed to be unhappy,” he said.

He told the graduates to find a vocation they love. “This seems so obvious, but sometimes the obvious things in life are true. I’ve been lucky in life to become an entrepreneur – something that I really enjoy. I’ve interviewed and worked with hundreds if not thousands of young college graduates, and it makes me sad to think some of you will be in jobs that you don’t enjoy. By the way, part of enjoying your job is being around people you want to emulate,” he said.

The entrepreneur ended his speech by telling the students that fun is allowed in life and they should seek it often. “It’s like anything else in life, it has to be a goal or it tends to get put on the back burner,” Hamilton said.

After Hamilton’s speech, Petillo presented an honorary degree to Matthew Galligan, a student who passed away from cancer. His parents and brother, also a SHU student, picked up the diploma.

It was then time for the much-anticipated conferral of degrees. Sacred Heart has a commencement tradition—if a graduate’s immediate family member is an alumnus, faculty or staff member he or she can process with the graduate on stage to assist with the awarding of their diploma. It is a tradition many graduates took part in over the weekend including Jean-Luc Sebabi, whose story is a little different than the average grad.

Sebabi, 23, was born and raised in the Democratic Republic of Congo. He left his country at 13 and completed high school in Nigeria before immigrating to the United States in 2014. He started his career in higher education in Connecticut community colleges and then came to SHU. Today he received his bachelor of science degree in biology with a minor in chemistry. He will work in SHU’s biology department as a lab assistant and volunteer with AmeriCares Free Clinic and the Connecticut Institute for Refugees and Immigrants as he applies to physician assistant programs.

It was the influence of former marketing professor Lorry Weinsten that led Sebabi to SHU. “I told him my ambition of becoming a health-care provider and he recommended I apply to SHU because they had a strong and reputable science curriculum that would prepare me for any health profession,” he said. “Lorry and his wife, Ellie, have been my mentors since I arrived in the U.S. They have guided me all the way.”

Lorry Weinstein passed away earlier this year and it was Ellie who processed with Sebabi across the stage because, as far as Sebabi is concerned, she and her late husband are family.

Nicole Cardarelli, student government senior class president, excitedly addressed her peers after degrees were handed out. “We all never thought this day would come, our parents crossed days off their calendar as we watched the countdown at Red’s. Now that graduation is here, I am both happy and sad to see it go because it means leaving behind professors, staff members and friends who have shaped me and my fellow students’ lives for the better,” she said.

Before Cardarelli led the class of 2019 in the traditional turning of the tassel she told her peers that their “reign” is over and it’s up to the next class to step into their shoes and start their own countdown. “As we embark on our own journey, whether you are going to grad school, starting a new job or taking a gap year, I wish you all the luck and hope that you never forget your days at Sacred Heart. One of my favorite quotes is ‘in life you make the small decisions with your head and the big decisions with you heart.’ Remember to always to go with your ‘sacred’ heart.”

Mary Claire Hemmer, 22, of Glen Rock, NJ, received her bachelor’s degree in exercise science and plans to keep her education going at SHU to obtain her doctorate in physical therapy. “I have treasured every moment of my time as an undergraduate and I am going to miss it more than anything, but I feel like SHU has given me all the tools I need  to thrive in what’s next to come.”

Hemmer said it was “impossible” to put into words what the past four years have meant to her. “I have had countless opportunities to step out of my comfort zone and become a more well-rounded person by getting involved on campus. My biggest takeaway from these four years are the relationships I’ve built with the students, faculty and staff here who have had an enormous impact on my life and who continue to support me in all my endeavors.”

Bianca Melillo, 22, of Danbury received her bachelor’s degree in accounting. After graduation, she will intern at Deloitte in Manhattan for three months and then return to SHU for her master’s degree in accounting. Deloitte will reserve Melillo’s position and she will join the team after she earns her CPA. Melillo said graduating is bittersweet. “The last four years at SHU have been the best of my life. I have transformed as an individual and learned more than I could ever imagine about both myself and my profession.”

While Melillo will miss SHU, she said she is ready to move on and start working in the field she spent the last four years studying. “I have become comfortable in the uncomfortable and that’s how I know it’s time to leave,” she said.

Twenty-two year old Trevor O’ Brien from Avon, MA, received his bachelor’s degree in mathematics. “While there’s no doubt I am going to miss all of the amazing people and opportunities Sacred Heart has offered me, I feel that I am ready to begin the next chapter of my journey.” O’Brien said if he were to use one word to describe his college career, he would use the word “humbling.”

“Being a very reflective person, I can absolutely say that I’ve been blessed to be here the past four years. All of my interactions with students, faculty and staff have allowed me to grow in so many ways—whether it be socially, academically or spiritually. My appreciation for my time here probably won’t set in until next September when I’m not longer walking on campus,” he said.

Saturday’s festivities celebrated the University’s graduate students and Petillo reminded them to give themselves to others. “Graduates, today’s ceremony is certainly to acknowledge your accomplishments. It is also a moment on your journey reminding you that much has been given to you; so hopefully you, too, will give of yourself. Today is a reminder for each of us, myself included, that our individual journey will be judged not by prominence or prestige but how we have lived for others.”

“We are here today because we already know how important education is. We all know that diplomas and graduate certificates are often useful in opening doors and positioning us for greater opportunities, but something that is often unrecognized is the intrinsic relationship between education and hope,” said Healey-Sedutto. “Education often gives us the tools to realistically and tangibly chart our course and navigate from where we are to where we want to be, and lacking this pathway to access can easily allow us to slip into hopelessness.”

Healey-Sedutto encouraged the graduates to foster education among people who weren’t fortunate enough to have the same opportunities as them. “Even though many of us may have struggled to achieve the goals we set for ourselves, we did not give up hope, and so again, I ask that you take a moment on this special day of celebration, and consider how you can spread your light on those in greatest need.”

Graduate student Peter B. Johnson was chosen to speak to his peers at graduation where he received his master’s degree in computer science and information technology. He encouraged the group to “press forward” and impart drive and success onto others.

“I came to Sacred Heart seeking a change, to gain mastery over new skills and to open new doors for myself. And while I can safely say, with much gratitude to you all, that much has been achieved, I never imagined I would be standing here on this day, addressing a room full of so much potential,” Johnson said. “With more than 1,000 students graduating today, there is so much here—a plethora of backgrounds, of stories, stretch out before me. Some of you have crossed oceans to be here; others have lived in this place your whole lives. Some are improving upon a long-established career; others are just starting on a new path in life.”

Johnson told the group, that as is Sacred Heart’s intent for all its students, they are now poised to make a difference in the global community. “And that internal spark, a key and precious aspect of yourself, will serve you well in doing just that. So harbor it, fan its flames and always protect it.”

Kristen Mourao, 23, of Seymour, received her master’s degree in occupational therapy and received her undergrad degree from SHU in 2017. “I will miss the community this school has the most. I always felt part of something when I was on campus and knew that if I ever needed help or assistance, or had any questions at all, there was almost always someone that could help assist me. I have met so many people and faculty that have contributed to my growth as a student, co-worker and future health-care professional.”