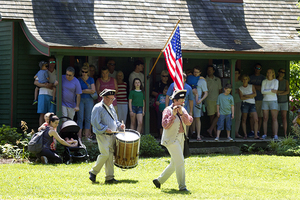 Fairfield, CT - Visitors from Fairfield and beyond were given a front-row seat to an extraordinary moment in Revolutionary War history this past weekend at the Fairfield Museum as it presented its new interactive tour Road to Independence: The Burning of Fairfield to a sold out crowd. The Museum, in partnership with Fairfield Center Stage, offered four presentations of the show, which included a short film, several stops at important locations on the Museum Commons, costumed professional actors, musicians, and re-enactors from the 54th Regiment of Foot.

The performance brought to life the events of July 7, 1779, the day that the town of Fairfield was invaded in an attack by 2,500 British troops. The local Patriot militia fought valiantly to protect the town’s homes and property from destruction, but by the end of the day on July 8th, more than 170 structures had been burned, or were burning, in the once prosperous and bucolic community. The audience became active participants in the story as they followed the actors all over Fairfield’s historic town green during this pivotal moment in American History.

“It was so great to see this production take over the Museum Commons in a way that fully engaged such a wide variety of community members,” said Michael Barraco, director of programs and education at the Fairfield Museum. “Children and families were entertained by the live musket fire and high stakes drama as British Soldiers took over the town green and important figures from colonial times came to life.”

The Museum was thrilled to be able to collaborate with professionals working in the arts for this event. The script was written by Tracy Brigden, who has over 20 years of experience in off-Broadway and regional theater, and directed by Eli Newsom of Fairfield Center Stage. The cast featured Lisa Dahlstrom, Roger Dykeman, Randye Kaye, William Squier, Ted Yudain, and Allan Zeller. Steve Johnson was the drummer and Tere Mak & Karen Boccadoro played the fife.

The Museum’s next outdoor performance is the rousing 74-piece CT Symphonic Winds this Sunday, July 14, 6:30pm to 8:30pm. The performance is free, and visitors are encouraged to bring picnics. The Museum also plans to offer Road to Independence interactive performances next summer over the Fourth of July holiday weekend. Look for more information at Fairfieldhistory.org, and don’t forget to reserve your spot next year!

About the Fairfield Museum & History Center

The Fairfield Museum & History Center and Museum Shop, located at 370 Beach Road, is open seven days a week, 10am-4pm. Members of the Museum and children under 5 are admitted free. For more information, call 203-259-1598 or visit Fairfieldhistory.org. The Fairfield Museum relies on funding from individuals, corporations and foundations. The Museum is especially grateful for leadership support from the State of Connecticut, Town of Fairfield and Fairfield County’s Community Foundation