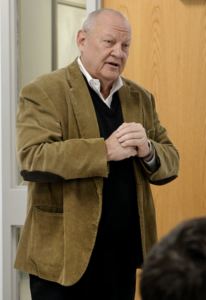 Soon after finishing his previous book, Haywire, about the 2016 presidential election, the professor and chair of the Department of Government got right to work on Connecticut in Crisis. “I knew the governor’s race was going to be interesting,” Rose said.

After decades of commenting on federal and state politics, Rose wanted to write a book that delved into the state’s many problems, weaving in the contentious gubernatorial race that was about to occur.

“I’m a native of Connecticut; I grew up here, I have family here,” Rose said. “I feel like I’ve been a real principal observer, an invested observer of the scene, and felt I could write about the issues. I have a feel for the system.” Moreover, Rose had already written several books on Connecticut’s government.

With the help of his research assistant, Bridget Hughes ’18, Rose began. The book includes nothing but the facts; there is no editorializing, Rose said. “It was not my intention to provide my opinion. I think people will see that I was objective throughout.”

Hughes helped compile articles for Rose to read and made sure he didn’t miss any state news updates. Hughes also played a significant role in providing graphics. “I was fortunate to have someone with her level of talent help me,” he said.

As Rose researched and wrote, he became surprised by his findings. “I just didn’t know how bad things were,” Rose said. He knew the state faced challenges, but he discovered the true condition of Connecticut’s infrastructure, business climate, homeless rate and more.

When it came time to naming his book, he thought the word “crisis” was appropriate. “I don’t use that word lightly,” he said. “I felt comfortable using that word to describe Connecticut.”

Rose plans to send copies of Connecticut in Crisis to lawmakers, political science professors and even the 2018 gubernatorial candidates. “I want the book to be a call to action,” he said.

Connecticut used to be one of the most prosperous states in the U.S., Rose said, and he would like politicians to know that now is not the time to engage in “partisan warfare.” “We have to fix this,” he said, noting that more and more SHU graduates are leaving the state to seek employment. “They have no intention of staying here,” he said.

To celebrate the book’s release and to get people talking about the state and its issues, SHU’s Institute for Public Policy will host and sponsor two panel discussions in the fall semester, aptly named “Connecticut in Crisis.” The talks will include Rose and other experts.

To purchase a copy of Rose’s book contact Academica Press at,  This email address is being protected from spambots. You need JavaScript enabled to view it. .