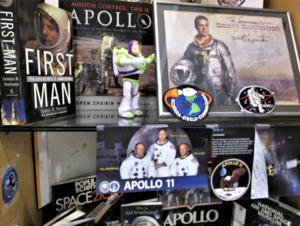 Fairfield, Conn. - The 50th Anniversary of the Apollo 11 Moon landing is being celebrated in the lobby of the Fairfield Public Library with a special commemorative exhibit of vintage patches, books, ephemera, and a photo autographed by Apollo 11 Astronaut Scott Carpenter. There are also books signed by Astronauts Buzz Aldrin and Alan Bean, and even Buzz Lightyear makes an appearance. This exhibit is from the collection of Kathleen and Gil Rodriguez of Gilann Rare Books of Darien, Connecticut. The display case is directly across from the Circulation Desk in the lobby.

Kathleen and Gil have been creating displays at the Main Library for a number of years. A recent display featuring Peanuts cartoon characters was particularly popular with patrons. The Rodriguez’s originally made displays at the Darien Library, but when that library was renovated, the display cases were removed. It was then that they volunteered to share their charming and interesting collections here in Fairfield, much enjoyed by Library visitors.