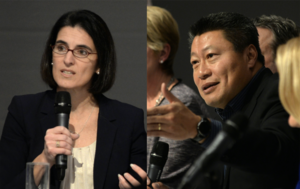 FAIRFIELD, Conn.—Sacred Heart University will debut a timely legislator-in-residence program this fall, engaging state lawmakers, students, faculty and the entire community in dialogue and discussion on a host of current policy topics.

State Sen. Tony Hwang (R-28) and state Rep. Cristin McCarthy Vahey (D-133), who each represent Fairfield, will spend two days on campus meeting with large and small groups as part of the new program, which the University’s Institute for Public Policy is sponsoring. They will participate in large policy forums, classroom visits and other events, giving guest talks on the state’s legislative process.

“It’s important to inspire young people to pursue public office,” said Lesley DeNardis, the institute’s executive director, whose father was a state senator in the 1970s. “Public service is a noble calling. I still believe that today.”

The program is in keeping with the institute’s mission “to inform public policy debate and foster constructive discourse on pressing issues facing Connecticut through research, education and community outreach.”

The initiative broadens the institute’s ongoing community outreach efforts, including a successful Congress to Campus program that welcomed former U.S. congressmen Gil Gutknecht of Minnesota and Robert Weygand of Rhode Island to Sacred Heart to foster civil literacy and increased participation in government.

As a nonpartisan entity, the legislator-in-residence program will include Democrats and Republicans from the Connecticut General Assembly.

Hwang, a former state representative now serving his third term in the state senate, said he is thrilled to be among the first lawmakers in the program. Meeting legislators one-on-one helps bridge the disconnect that sometimes exists between the reality of meaningful policy debate and constituents’ impressions of the political process, he said.

“To be a legislator-in-residence, particularly with Sacred Heart, is an incredible opportunity to have interplay with the legislative experience and share with the school, faculty and students,” said Hwang. “It’s not what you see on TV. This gives them the evolving dynamic process, rather than the ideologic process.”

McCarthy Vahey, a former Fairfield selectman elected to the state legislature in 2014, said she looks forward to empowering and exchanging ideas with the young people she will meet through the program.

“The more we can demystify the legislative process, increase civic engagement and provide the skills needed to be effective advocates, the stronger our democracy will be,” she said.

Hwang, who, like McCarthy Vahey, has appeared on campus in the past, said Sacred Heart students are “refreshing, surprising, demanding and challenging.

“These are motivated students,” he said. “These are kids that believe and actually engage. It will be a privilege and a joy.”

About Sacred Heart University
As the second-largest independent Catholic university in New England, and one of the fastest-growing in the U.S., Sacred Heart University is a national leader in shaping higher education for the 21st century. SHU offers more than 80 undergraduate, graduate, doctoral and certificate programs on its Fairfield, Conn., campus. Sacred Heart also has satellites in Connecticut, Luxembourg and Ireland and offers online programs. More than 9,000 students attend the University’s eight colleges and schools: Arts & Sciences; Communication, Media & the Arts; Computer Science & Engineering; Health Professions; the Isabelle Farrington College of Education; the Jack Welch College of Business & Technology; Nursing; and St. Vincent’s College. Sacred Heart stands out from other Catholic institutions as it was established and led by laity. The contemporary Catholic university is rooted in the rich Catholic intellectual tradition and the liberal arts, and at the same time cultivates students to be forward thinkers who enact change—in their own lives, professions and in their communities. The Princeton Review includes SHU in its Best 385 Colleges–2020 Edition, “Best in the Northeast” and Best 267 Business Schools–2018 Edition. Sacred Heart has a Division I athletics program and an impressive performing arts program that includes choir, band, dance and theater. www.sacredheart.edu