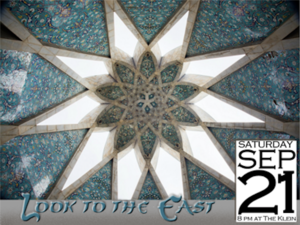 Bridgeport, CT - The Greater Bridgeport Symphony has scheduled a season of music from all eras, showcasing the evolution of music.  In five concerts this coming season, GBS will explore connections between old and new, East and West, Classical and Broadway, folk tales and melody.  GBS President Orin Grossman is particularly excited about the season saying, “The extraordinary talent of our youthful soloists and the wonderful energy of the Children’s Chorus, as well as the dynamism of conductor Eric Jacobsen inspires me and fills me with hope for the future of great music.  Audiences will be rewarded by some of the best musical experiences between the Hudson and the Housatonic!”

The season premieres on Saturday, September 21, 2019 at The Klein Memorial Auditorium in Bridgeport, CT as Eric Jacobsen returns for his sixth season and welcomes members of Yo Yo Ma’s Silkroad Ensemble  - Indian tabla virtuoso Sandeep Das, Persian kamancheh (or spiked fiddle) master Kayhan Kalhor, and American cellist Karen Ouzounion for Look To The East – a concert combining an iconic Russian masterpiece, Tchaikovsky’s “Violin Concerto,” with a modern master “Blue as the Turquoise Night of Neyshabur.”

The Silkroad Ensemble’s mission is to create “music that engages difference, sparkling radical cultural collaboration, and passion-driven learning for a more hopeful and inclusive world.”  “In times like these,” says conductor Jacobsen, “when political tensions are running high, Kayhan’s music is a bridge to one of the most ancient cultures on the planet.  Through music, we can discover that differences between people are not monolithic.”

GBS’ premiere concert is also notable for the appearance of 17-year-old West Hartford, CT violinist Matthew Hill, one of the winners of GBS’ Youth Instrumentalist Competition earlier this year.  Hill will solo on Tchaikovsky’s “Violin Concerto,” one of the greatest and most recognizable works of the Russian genius.

The second concert of the 20/20 Visions season is Telling Tales on Saturday November 2 at The Klein, anchored by Brahms’ “Fourth Symphony.”  His last and perhaps greatest composition, it was once described as “like a dark well; the longer we look into it, the brighter the stars shine back.”  Brahms was a major influence, and early advocate of Dvorak, whose work “Moravian Duets” will be adapted with storytelling for this concert, to create a blend of folk-inspired Classical music with a modern folktale.  Noted composer Lembit Beecher is arranging the work, which will be sung by Sarah Shafer and Jazimina MacNeil, who returns to GBS after a well-received performance of Mason Bates’ “Passage” last season.  A special guest storyteller will narrate a folk tale for modern times.

On December 21, just in time for Hanukkah (the 22nd) and Christmas, comes Solstice, a concert of holiday music anchored by the Bach “Christmas Oratorio.”  The Fairfield County Children’s Choir and the Connecticut Chamber Choir will join GBS in this concert, which also includes “Midwintersong,” a joyous new composition by Liam Robinson, Kirke Mechem’s “The Seven Joys of Christmas,” and other holiday fare.

March 14, 2020 is a musical expedition.  The great Dvorak symphony “From the New World” will be complemented by “The Brendan Voyage,” a 1980 composition by Irish composer Shaun Davey.  Davey’s piece relates the legend of St. Brendan the Navigator, who wrote of traveling across the ocean from Ireland with 13 other monks to discover the new world.  “The Brendan Voyage” is written for solo on the uilleann pipes, a traditional instrument of Ireland; GBS is pleased to be joined by Jerry O’Sullivan, widely hailed as America’s premier uilleann piper.  “The combination in this concert of Dvorak’s ‘musical postcards’ from America and Davey’s musical journey is quite stunning, especially with St. Patrick’s Day so close at hand,” says GBS Executive Director Mark Halstead.  “The audience is in for a great tour!”  The tour doesn’t end there, though; the concert also includes a special performance of Bartok’s “Viola Concerto,” performed by another winner of the Young Instrumentalists’ Competition, Sofia Gilchenok.

Classical Broadway is the last of the five season concerts, on April 18, 2020.  Chelsea Tipton, conductor of the New Haven Pops series, will be guest conductor of this Broadway extravaganza, that reaches back to George M. Cohan.  The music of George Gershwin and Leonard Bernstein, the greatest of the Classical-to-popular crossover composers, will light up the stage.

Subscriptions are on sale now through www.GBS.org, or by calling the GBS office at (203)576-0263.  Five concert Gold Subscriptions are range from $70 to $240, and three-concert Silver Subscriptions are from $39 to $150; ticketing charges additional to all sales.  All subscribers get access to discount meal deals at a dozen local restaurants, and Gold Subscribers get one “Bring-a-Friend” voucher for an additional ticket any time during the season.  All concerts are on Saturday evenings at 8 PM at the fabulous Klein Memorial Auditorium, 910 Fairfield Avenue, Bridgeport, with ample free, lighted parking across the street.