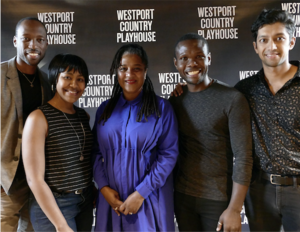 Support for “’Mlima’s Tale’: Discovery Series” is provided by a grant from CT Humanities.

Written by Lynn Nottage, two-time Pulitzer Prize winner, and directed by Mark Lamos, Playhouse artistic director, “Mlima’s Tale” is about a magnificent and beloved Kenyan elephant named Mlima hunted for his coveted ivory tusks. As traffickers maneuver the illicit ivory market, from Kenya to Vietnam to China, the animal’s invincible spirit follows their path of desire, greed, crime, and corruption.

This is the first production of the play since its world premiere Off-Broadway last year.

“‘Mlima’s Tale’ is an extraordinarily stimulating, provocative work about something truly important, and we want to give our audiences the opportunity to delve further into the profound questions it asks about humankind and our relationship to the environment and the animal world,” said David Kennedy, Playhouse associate artistic director. “We’re so grateful for CT Humanities’ ongoing support year after year in helping us engage our community in these kinds of thoughtful dialogues and programs that support the work on our stage.”

“A Conversation with Lynn Nottage,” playwright of “Mlima’s Tale,” was filmed during a public event on September 29, as the two-time Pulitzer Prize winner discussed her play, “Mlima’s Tale,” her career, and body of work with Mark Lamos, Playhouse artistic director.  Anyone who was unable to attend may access a replay of the program at westportplayhouse.org by October 4.

“The Ivory Trade in Connecticut and Beyond” will feature three panelists discussing their experiences with the ivory trade, ranging from government legislation to animal advocacy to on-the-ground operations, both internationally and within Connecticut, on Sunday, October 13, following the 3 p.m. matinee performance.  Panelists are Kenneth Bernhard, a principal with the Fairfield County law firm of Cohen and Wolf, PC., who spent many years advocating for the protection of African wildlife from illegal trafficking, and worked with the African Wildlife Services in Kenya and Senegal on anti-poaching endeavors including serving as a decoy in sting operations in Nairobi; Priscilla Feral, president, Friends of Animals, a non-profit animal advocacy organization that has supplied direct assistance to rangers in 10 African countries to bolster anti-poaching patrols and suppress the killing of elephants; and State Representative David Michel, an environmental activist; moderated by Liam Lonegan, Playhouse artistic associate/assistant director.

Other discussions include post-play dialogues on Thursdays, October 3 and October 10, where patrons are welcome to discuss the play and its themes with artistic staff in the Playhouse’s Smilow Lounge on the mezzanine level.  Backstage Pass is set for Wednesday, October 16, a behind-the-scenes look at what makes “Mlima’s Tale” work, following the 2 p.m. matinee performance.  Thursday TalkBack is on Thursday, October 17, a lively, 20-minute Q&A with actors from “Mlima’s Tale,” following the 8 p.m. performance.

A photography exhibition, “Vanishing” by artists Penrhyn and Rod Cook, will be open to the public during the run of “Mlima’s Tale,” from October 1 through October 19, in the Playhouse’s mezzanine lobby.  All artwork is offered for sale.

In addition, student matinee performances will take place during the run.  Study guides will be provided by the Playhouse to connect the production to subjects in local school curricula.

An earlier event on September 16 was a screening of the documentary, “When Lambs Become Lions,” directed by Jon Kasbe, about the illicit ivory market in Kenya, presented in partnership with The Westport Library and the Playhouse. A copy of the film is available at The Westport Library.

Production Sponsors are Czekaj Artistic Productions and Barbara and John Samuelson. Education Sponsor is Graham Foundation of Connecticut.  The project is supported in part by CT Humanities and the National Endowment for the Arts.  2019 Season Media Sponsors are Moffly Media and WSHU Public Radio.

For information on all “Mlima’s Tale” special events, visit westportplayhouse.org/MlimasTaleEvents or call the box office at 203-227-4177.