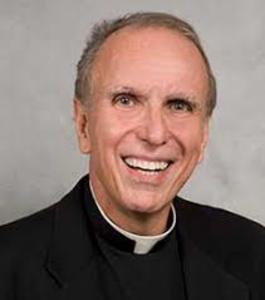 In the summer of 2018, Ciorra received an unexpected phone call from the show’s producer asking if he’d like to provide assistance. “‘Well,’ I said to him, ‘Tell me more,’” Ciorra related in his office one October afternoon. “The producer explained the show to me and it sounded exciting. I said, ‘I’ll do it.’”

“God Friended Me” is a drama that focuses on the main character, Miles, an atheist who runs his own podcast. One day he receives a friend request on social media from “God.”

“This God account appears out of nowhere,” Ciorra said. “The account puts Miles in touch with people who are in need.”

The account also leads Miles to reconnect with his father, Arthur, a pastor. “The show itself isn’t so much about religion as it’s about spirituality,” Ciorra said. “People’s quest for something more in their lives.”

As a consultant, Ciorra receives scripts of the episodes and marks edits. He also attends some of the tapings in New York City to make sure scenes set up in churches are staged properly and actors wear the appropriate religious garb.

Reading the scripts is nothing like watching the show, Ciorra said. “It’s a whole different feeling; it has an emotional piece to it…it’s really touching your heartstrings.”

Ciorra said he’s using his experience and academic background to be of service: whenever there’s a church- or religion-related question, he helps answer it. But he’s not just fielding Catholic or Christian questions—the show looks at all religions and spiritualities.

“God Friended Me” is in its second season. Ciorra thinks it’s been so successful because it’s relatable. “It’s about human need, relationships…basic human interest. There’s such wide appeal here,” he said.

To Ciorra, the concept of all the characters, from different walks of life, getting along is beautiful. “They become a community in their diversity,” he said. “This is really what we are called to be. It’s humanity at its best.”

Throughout the consulting process, Ciorra has developed an affinity for the show. “This cast is really amazing,” he said. “They are such loving, beautiful people. They are delightful, and I feel a real closeness to them.”

Ciorra never imagined he would take part in anything having to do with film or television. He said it’s nothing he ever prepared for, but he’s learning a lot and truly enjoying the experience. “So much goes into it,” he said. He was unaware, yet impressed, with the number of sound technicians, makeup professionals and other staff needed to make a show happen.

The show is still filming, and Ciorra continues to look forward to reading more scripts, answering producers’ emails and attending tapings when time allows for it. “This is a real enriching experience,” he said.

As the second-largest independent Catholic university in New England, and one of the fastest-growing in the U.S., Sacred Heart University is a national leader in shaping higher education for the 21st century. SHU offers more than 80 undergraduate, graduate, doctoral and certificate programs on its Fairfield, Conn., campus. Sacred Heart also has satellites in Connecticut, Luxembourg and Ireland and offers online programs. More than 9,000 students attend the University’s eight colleges and schools: Arts & Sciences; Communication, Media & the Arts; Computer Science & Engineering; Health Professions; the Isabelle Farrington College of Education; the Jack Welch College of Business & Technology; Nursing; and St. Vincent’s College. Sacred Heart stands out from other Catholic institutions as it was established and led by laity. The contemporary Catholic university is rooted in the rich Catholic intellectual tradition and the liberal arts, and at the same time cultivates students to be forward thinkers who enact change—in their own lives, professions and in their communities. The Princeton Review includes SHU in its Best 385 Colleges–2020 Edition, “Best in the Northeast” and Best 252 Business Schools–2019 Edition. Sacred Heart is home to the award-winning, NPR-affiliated radio station, WSHU, a Division I athletics program and an impressive performing arts program that includes choir, band, dance and theater. www.sacredheart.edu