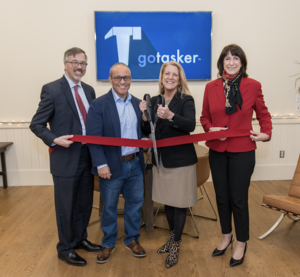 Fairfield, Conn. – The Fairfield Chamber of Commerce is happy to announce that its new member, goTasker, held its Grand Opening Ribbon Cutting on January 9, 2020.  The official ribbon cutting ceremony was officiated by First Selectwoman Brenda Kupchick.

Founder and owner Frank Festini, also the president of Southport Construction, knows too well the struggles of being a small contractor. He is aware of the overwhelming process of marketing, estimating, scheduling, billing, building client relations, and the effort it takes to remain competitive and, most of all, profitable.

When he developed goTasker, he was ultimately looking to create an indispensable tool to share among his fellow tradespeople that would help make small contractors more successful.

After studying architecture and civil engineering in college, he went to work on Wall Street. He transitioned into IT and then worked in software. Wanting to return to building and working with his hands, he began his construction company, Southport Construction, which specializes in custom home building and remodeling. Being an entrepreneur, he simultaneously launched Contractor’s Assistant, which provided contractors with bookkeeping and other office assistance. For more than a decade during that time, he also owned a residential property management company, at which he interacted with many trades.

Frank realized small contractors were not currently served with professional software, like that available in other industries. Rather than trying to make the work of contractors easier and more successful through services (like the bookkeeping company), he decided to build goTasker. The goTasker app is a multipurpose software usable on a smartphone or a desktop computer. Its many features include a scheduler/calendar, automated invoicing and quoting, photo and document uploading, and QuickBooks integration. And, it continues to evolve based on the needs of its users.

“In addition to the software, I also wanted to create a community of contractors helping one another,” says Frank. So, events with contractors getting together is central to GoTasker’s mission, too. “We all started out loving construction,” he adds, “But then the business gets in the way. Hopefully, with goTasker, we can make the business easier and bring back some of that joy.”

Address:  400 Center Street, Southport, CT   (The office is IN the Southport train station [NY/Westbound] next to the waiting area).

Email: This email address is being protected from spambots. You need JavaScript enabled to view it. .