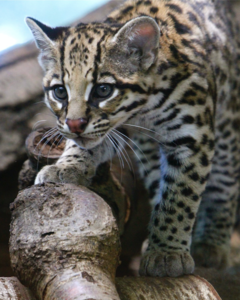 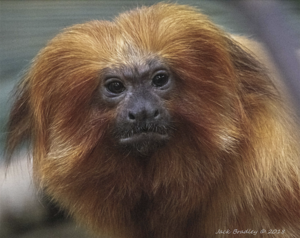 BRIDGEPORT, Conn. – Connecticut’s Beardsley Zoo continues to grow in exciting new ways as it executes its mission of conservation, education, research and recreation. The Zoo is now home to Pipoca, an almost two-year-old ocelot, and Leao, a seven-year-old Golden Lion tamarin. Both of the new arrivals have spent the past several weeks in quarantine, required for any new arrival. Managed by the AZA’s Species Survival Plan (SSP), inter-regional transfers are arranged with careful attention to gene diversity when placing animals in their new homes.

Pipoca was born on March 13, 2018. She can be found in the Zoo’s Rainforest Building. For a short period, the glass walls of the habitat will be fully or partially covered with paper to allow Pipoca to gradually adjust to her new surroundings in semi-privacy. As Pipoca becomes more comfortable, the paper will be removed, allowing guests to view her in a newly refurbished habitat.

Ocelots (Leopardus pardalis) are medium-sized, solitary cats native to the southwestern United States, Mexico, and Central and South America.  Ocelots once ranged in large numbers from Arizona to Arkansas and Louisiana, but the fur and pet trades decimated the population. In the United States, fewer than 60 ocelots remain in two small populations 20 miles apart in south Texas near the Mexican border. These largely nocturnal cats use keen sight and hearing to hunt rabbits, rodents, iguanas, fish, and frogs. They also take to the trees and stalk monkeys or birds. Unlike many cats, they do not avoid water and can swim well.

Leao arrived several weeks ago and has been undergoing a period of adjustment to his new surroundings. He can be found in the Rainforest Building as well. Considered the most beautiful of the four tamarin species, the Golden Lion tamarin is named for the thick mane of hair around his neck, reminiscent of the great cats of Africa. Golden Lion tamarins live primarily in the trees. They sleep in hollows at night and forage by day while traveling from branch to branch. Long fingers help them stay aloft and snare insects, fruit, lizards, and birds.