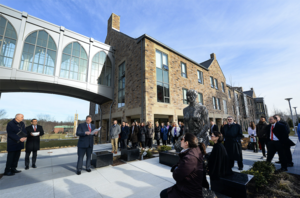 The two men are seen as people SHU students can emulate: Wiesel was a Holocaust survivor, teacher, author and activist, and Frassati was a devout Catholic who dedicated his life to social justice.

The dedication ceremony took place at Toussaint Hall, named for a freed slave who became a noted philanthropist, another Upper Quad residence hall that opened in 2018. Ultimately, there will be six halls altogether in that section of campus accommodating 900 students.

The residence halls also play a significant role in students’ development, according to Coppola. He said students who live on campus are more likely to interact with faculty and staff, get involved with cultural activities and clubs and form lifelong friendships. The halls also are places where students continue the conversations from the classroom, he said.

The new halls, connected by a bridge, measure a combined 120,000 square feet. Their design provides comfortable and welcoming spaces where a total of about 250 sophomores can thrive. Each hall has a “great room” with a fireplace, dedicated group study rooms and various common lounge spaces for informal gatherings.

Marisa Martire, University friend and donor, spoke at the dedication about the great accomplishments Frassati achieved before his death at age 24 by polio, dedicating his life to the homeless and standing up for the voiceless.

New York University Professor Nadine Strossen, former president of the American Civil Liberties Union and friend and donor to SHU, spoke about Wiesel’s background and beliefs. She said Wiesel stood up for victims of oppression, raising his voice and speaking out against injustice. He believed all people had the “special qualities” he possessed, Strossen said: “courage in the face of cowardice, hope in the face of despair and love in the face of hate.”

Sophomore Maisy Carvalho, a media arts student and resident success assistant in Frassati Hall, said she was grateful to be part of the dedication ceremony and to work in such an incredible building. She said she was looking forward to playing Frisbee on the lawn with her peers, relaxing on the amphitheater steps and learning how to prepare recipes in the kitchen. Students will look forward to coming back to the halls after classes, she predicted. “We can all return to a place we have called home,” she said.

After the speeches concluded, guests walked outside and directly under the new halls’ bridge. Father Anthony Ciorra, vice president of the Office of Mission and Catholic Identity, told them the bridge represents connection and bridging religions, cultures and people. With the help of Rupendra Paliwal, provost and vice president of academic affairs, Ciorra blessed the buildings with holy water.

Outside the halls stands a sculptural installation titled “Spannungsfeld” by Portland, OR, artist Julian Voss-Andreae. The installation is made up of two 10 feet tall figures in a kneeling pose, a male and a female, facing each other. According to Voss-Andreae, the two figures represent nature’s omnipresent pairs of opposites joined in unity and transcendence.

As guests toured the new halls, senior Benjamin Harrell, a nursing student and resident success assistant, called them amazing and said he is happy to work there. He called the bridge his favorite feature. “It’s really nice to be here when the sun is setting,” Harrell said.