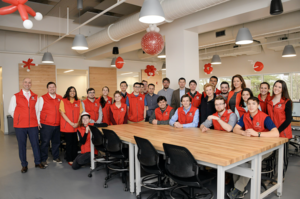 The University has officially opened its IDEA Lab (Innovate|Design|Engineer|Apply) at the West Campus with a dedication event attended by special guest Linda McMahon, a long-time supporter of SHU. Hundreds of excited students, faculty, staff and community members gathered for the ribbon-cutting ceremony.

“This has been a vision, a goal and a dream,” said Rupendra Paliwal, provost and vice president of academic affairs. After visiting a similar lab at Yale University, Paliwal said, he and faculty members put their heads together to conceive and build something beyond the typical university makerspace. They also wanted to be pioneers in bringing business and technology together on campus. Under strong leadership, Paliwal said, that vision came to fruition. “We want our students to do real-life projects and to be useful to the small-business community,” he said.

Following a video about the IDEA Lab, SHU President John J. Petillo invited the audience to tour the lab saying, “I would be shocked if you are not impressed.”

Earlier in the day, McMahon and Petillo explored the lab with Martha Crawford, dean of the Jack Welch College of Business & Technology (WCBT). They stopped at several stations to speak with WCBT engineering and computer science students who were demonstrating the use of the facility’s high-tech equipment including a 3D-printer and a range of prototyping equipment such as a thermo-molder, water and laser cutters and a drone fleet.

Later, Petillo introduced McMahon to guests as a VIP who is a longtime member of the SHU family. Her creativity and entrepreneurship should be an inspiration to all students, he said.

McMahon, co-founder of WWE and former administrator of the Small Business Administration, reflected on the University’s growth. She served on the University’s board of trustees for 12 years before her career called her away. She recalled the first big project the board dealt with under her watch—the building of the Chapel of the Holy Spirit. McMahon added that she was also proud that she participated in the recruitment of Petillo.

During her time at the Small Business Administration, McMahon said she visited numerous companies and saw how important it is to have a workforce trained to use modern machinery and technology. She noted that WCBT’s engineering students are getting excellent training in the IDEA Lab.

“Students are inventing and creating materials and producing them while learning skills they will apply in the real world. This is fantastic,” said McMahon. “What you are doing is so innovative and cutting-edge and exciting.”

Cedric Bleimling, professor and lab manager, said students, faculty and staff now have the means to create almost any hardware product they can conceive. “We offer a wide range of machines, from 3D printers to laser-cutters to a water jet-cutter,” he said. “Combined, these machines allow students to build electronic devices such as a smart thermostat, custom furniture, customized T-shirts or mugs or even a custom soap bar. We have advanced manufacturing machines that can create parts for heavy-duty use as well, such as carbon-fiber bodies for drones or metal parts for industrial use. Overall, our equipment, combined with our dedicated collaboration areas and culture of sharing, offers a fertile ground for creativity and prototyping accessible to all of our SHU community.”

Students can get involved with the IDEA Lab by signing up for training on the machines, which is offered every week. There also will be workshops with experts who will help guide students to accomplish their goals and an “open lab” component that enables them to work on a project with staff to help them on a first-come, first-served basis. “This is the perfect time for students if they want to hang around and learn from others or share their amazing skills,” Bleimling said.

Junior computer science major Graham Hughes of Orange showed off a wooden cabinet he made in just four days that holds and keeps paperwork and tools organized. “Creating the design took about two days, and then building it took about one or two,” Hughes said proudly. “This is the first time I ever did something like this.”

Freshman Ashley Mooney, a theater major, said she learned how to make a mold about a week ago. “I consider myself an artist, and I like making things,” said Mooney, whose favorite aspect of the lab is the people. “I know that might sound cheesy, but without them, it wouldn’t be like this…we wouldn’t have this kind of environment.”

“By providing an active learning experience, we are hoping to better prepare students with the critical 21st-century skills they will need in the workforce. On top of the technical skills, our hands-on, collaborative approach fosters critical thinking and boosts self-confidence,” Crawford said. “We hope this will translate into students who feel better prepared for their future careers, as well as starting projects of their own and becoming entrepreneurs.”