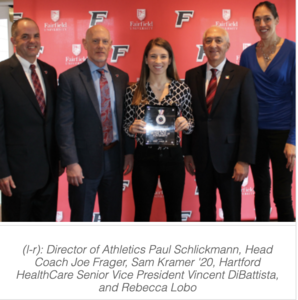 Fairfield, CT - Fairfield University Women’s Basketball tri-captain Sam Kramer ’20 received the Hartford HealthCare Courage Award this past Wednesday, Feb. 12. Kramer was presented with the award by Hall of Famer and Olympic gold medalist Rebecca Lobo before a crowd of her teammates, family, friends, and University community members at Alumni House.

Kramer was recognized by Hartford HealthCare for her perseverance after the death of her father during the Christmas season of 2018. Kramer lost her father in the middle of the Stags’ 2018-19 season after his very sudden battle with hemophagocytic lymphohistiocytosis (HLH) – an illness which led to non-Hodgkin's T-cell lymphoma.

After missing just two games, Kramer returned to the starting line-up as a leader on the court and in the locker room. Three months after her father's passing – on the eve of the 2018-19 MAAC Championship – Kramer shared the experience in an essay published on ESPNW.

Along with the Courage Award, a donation of $1,250 has been made in Kramer’s name to Fairfield University’s general scholarship fund.

Each month, two inspiring student-athletes who have demonstrated courage in the face of adversity – such as overcoming injury, illness, or other challenges – are recognized as Hartford HealthCare Connecticut Courage Award Winners. A panel of writers, editors, and sports information directors from CoSIDA, AP, and College Hoops Illustrated, as well as Ms. Lobo, select the honorees. Hartford HealthCare will donate a total of $15,000 to the general scholarship funds for the student-athletes being honored throughout the year. Kramer was selected along with UConn football's Eli Thomas for the award.