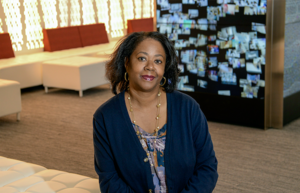 FAIRFIELD, Conn.— Elizabeth Johnson-Tyson, master of social work on-ground program coordinator and chair of the social work student success program at Sacred Heart University’s School of Social Work, will be honored at the 100 Women of Color Gala & Awards 2020. The black-tie event will take place Friday, June 19, at The Bushnell Theater in Hartford.

The recognition “feels a bit surreal,” said Johnson-Tyson. “I had been given the heads up that I was nominated, but I didn’t think for a moment I would win.”

After her tenure as state director of foster and adoption services at Connecticut’s Department of Children and Families (DCF), Johnson-Tyson was called to develop a program, the DCF/MSW program, in which she worked with staff and universities to help them pursue their master’s degrees in social work. After leaving DCF as state director, Johnson-Tyson came back as a consultant and trainer to serve as a mentor, counseling approximately 60 people over the years in the DCF/MSW program. Though no longer with the DCF/MSW program, she continues to mentor working professionals on her own time.

“It keeps people coming back,” she said of the mentorship. “What the public doesn’t realize is the toll that the tragedies we see every day take on the people who work for DCF. It’s called secondary, or vicarious, traumatization.” This effect can lead to burnout and a higher rate of turnover within the department. Johnson-Tyson’s program and the time she spends mentoring helps reduce the rate of burnout and guides others along their career path.

Johnson-Tyson relates her desire to pursue social service to her father’s upbringing. Rufus Johnson’s mother died when he was only 5 or 6 years old. As the youngest of 10 children, he was left alone with his father in Jim Crow-era Alabama after his older siblings moved away. “I was challenged by the hurt and lack of opportunities my father experienced growing up,” Johnson-Tyson said.

Ultimately, things turned out well for Johnson—he moved to Ohio, became a marine, met his wife Myrtle, had four children and lived a good life. And his experience cultivated a deep compassion and drive in his daughter, who asked herself: Why can’t everyone have a happy ending? “People struggle. Kids struggle. Someone needs to help them,” she said.

As a student at Ohio State University, the closest degree she found to the service she wanted to perform was psychology. It was not until Johnson-Tyson moved to Connecticut she even heard the term “social work.” Once she discovered the profession, she knew she it was her calling. It was exactly the career she dreamed of for herself.

“We at Sacred Heart are so proud that Elizabeth is being honored this way,” said Robin Cautin, dean of SHU’s College of Arts and Sciences. “Her work as an educator, both inside and outside the classroom, is shaping the next generation of social work professionals.”

“Elizabeth Johnson-Tyson is being recognized for her advocacy and her efforts to effect change, not just for people of color, but for everyone in her current position,” said June Archer, president and CEO of Eleven28Entertainment, the gala’s producer.

The 100 Women of Color Gala & Awards acknowledges the contributions that women of color in Connecticut and Western Massachusetts make in business, education, entrepreneurship, entertainment, government and public service. The event’s stated goal is “to provide financial support for programs that support the advancement of young women of color.” Honorees are nominated by people in the community, peers and past honorees.

A portion of the proceeds from the evening will be contributed to scholarships for high school graduates attending college or pursuing leadership and mentorship programs. Johnson-Tyson has advice for these young women: “Pursue and live your life from a place of gratitude and selflessness. If you do that, you’ll win. In fact, that would be a win for everyone.”