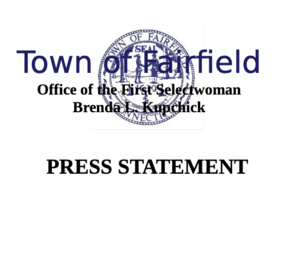 “This is very good news for taxpayers in the Town of Fairfield,” said First Selectwoman Brenda Kupchick, “We were able to take advantage of the low interest rate environment and refinance bonds for significant budgetary savings moving forward.”

As a result of the refinancing, the Town will lower its interest costs by over $1.7 million spread over the next 12 years.  The Town received a total of twelve bids on the Bonds, with Robert Baird & Co. submitting the winning bid.  Baird beat out firms such as Janney Montgomery Scott who was the second place bid, Mesirow Financial, Roosevelt & Cross, and JP Morgan, among many others.

The interest rates bid on the bonds ranged from a winning bid of 1.72% to a high bid of 1.85%. It was a tightly contested competitive sale.  The spread, or difference, between the winning bid and the last place bid was under 13 basis points (0.13%).  The bonds will refinance bonds originally issued in 2012.  The proceeds of that issue were originally used to finance a number of capital projects including Fairfield Woods Middle School, Sherman school, Fairfield Warde High School, road improvements and a number of other public improvement projects.

“Considering the extreme municipal market volatility that we experienced in mid-March, to call these results exceptional would be an understatement,” said Matthew Spoerndle, senior managing director of Phoenix Advisors and Fairfield’s municipal advisor. “It’s very rare to receive this many bids on a bond sale and for the Town to save even more than we had anticipated before the market collapse, this is amazing!”

Moody’s affirmed Fairfield’s rating at Aaa, which is the highest rating available.  Within the report, Moody’s referenced the Towns “large and wealthy tax base that will remain strong over the long term” and “solid and consistent fiscal position” while also noting “manageable long-term debt and pension obligations” as credit strengths.  The also included a Stable outlook on the Town “driven by our expectation that the town's strong wealth metrics, sizeable economy and effective management will allow it to maintain credit quality despite the uncertainty of the declining national economy.”