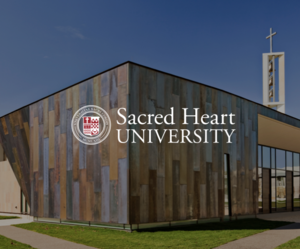 FAIRFIELD, Conn.— When a student or professor in Sacred Heart University’s community has a brilliant idea for a new product or service but doesn’t know how to turn the thought into a plan, it’s time to see Richard Guha, SHU’s entrepreneur-in-residence. Even while most University business and classes are being conducted online during the pandemic, Guha is still available to mentor inspired Pioneers.

Over the last 28 years of Guha’s distinguished 45-year career, he has engaged with startups as founder, board member, CEO, mentor and investor. Several of the startups in which he has been involved have had multi-million-dollar exits—meaning the business was acquired or, rarely, it issued an initial public stock offering—and one currently has a $1 billion valuation.

“When classes are in session on campus, I walk around and chat with students,” Guha said. “As I develop a rapport with them, they gain the courage to ask questions and talk to me about ideas that have been floating around in their heads.” Without the current ability to chat informally with students, he’s reminding them that they can still reach out to him during this time.

Guha’s mission as SHU’s entrepreneur-in-residence has three components. The first is encouragement of students’ curiosity about new ideas and possibilities. “I want them to come to me even if they are just curious about being an entrepreneur. You can even come talk if you don’t have any ideas but want to find out what’s involved in being an entrepreneur,” Guha said.

The second component is guidance. Guha teaches students how to execute the next steps for pursuing their venture. He guides them through negotiating the legal structure and finding a lawyer who will work with them for free or inexpensively, setting up their books, developing a plan or product road map, marketing their business and hiring the right people when the time comes. “I won’t do the work for them, but I help them do it themselves. If there is something they cannot do, I help them find someone who can work with them.”

Third, Guha helps introduce his clients to those in the industry who may be able to help with investments and business set-up to get them on their way.

Entrepreneurship is not only for business majors. “Whatever your degree is, you can apply it to being entrepreneurial,” said Guha. All experience is relevant. “Don’t think that your life has to be linear. Just because you want to do something different than what you’ve done so far, doesn’t mean that you don’t have the experience to make it work.”

Don’t let a fear of failure get in your way, he advised. “I’ve mentored students who went off and did something entrepreneurial for a year or two after college, and either it failed, or they lost interest. When they joined a large corporation, they went into a higher-level position than they would have straight out of university.” Corporations value the experience gained from being an entrepreneur, even if one fails. “There is nothing wrong with trial and error. As an entrepreneur, you are the CEO, the chief innovator and the chief marketing officer. The things you learn are more relevant than you realize.”

People with entrepreneurial spirit are excellent assets to the innovation within companies—often called intrapreneuring—because they come up with new ideas for new businesses within the corporation. Nonprofit organizations also offer opportunities for entrepreneurs or intrapreneurs.

Wilder Rumpf ’20, who carried a double major in finance and economics at Sacred Heart, consulted with Guha for over a year while forming FinTron, a broker-dealer business currently developing a banking and investing app for people between the ages of 18 and 39. “FinTron has gone on to raise more than a half a million dollars in just under a year,” said Rumpf, noting that he also owes special thanks to Professor Mark Ritter and late Professor John Gerlach.

“Richard is a wonderful mentor with an endless Rolodex of connections. He provided me with industry insight, connections to resources and a friendly face during some tough times I’ve faced as a founder,” said Rumpf, who plans to launch FinTron this summer.

“Richard has given me great advice on what direction to take with my business endeavors and what I can do to proceed,” said Caitlin Golynker ’23, a business management and finance major at Sacred Heart. “He possesses connections in various fields that can help your idea progress and give you the ability to collect more information on your idea.”

Tobi Aminu ’20, who graduated with a degree in finance and plans to continue his education in Sacred Heart’s MBA program, has spent a great amount of time with Guha preparing business plans for his venture. “I feel like a sponge whenever I speak with Mr. Guha,” said Aminu. “His wisdom is endless and I know I will benefit from this opportunity.”

“The Sacred Heart community is lucky to have someone with Richard’s depth of business acumen and experience, who is available to help create the entrepreneurs of tomorrow,” said Martha Crawford, dean of the Jack Welch College of Business & Technology. “Anyone with an inkling of an idea should spend some time talking to Richard. He’s an invaluable resource to our students and faculty.”

Guha also often serves as a judge and mentor for startup weekends, much like Techstars and Sacred Heart’s virtual startup weekends. Participants often contact Guha after the weekend is over, seeking advice on how to move their business plan forward.

The goal of the entrepreneur-in-residence program is to produce Sacred Heart alumni with an entrepreneurial frame of mind who believe there are no boundaries to what they can accomplish.

Anyone from Sacred Heart can reach out to Guha at  This email address is being protected from spambots. You need JavaScript enabled to view it.  at any time, even if it’s just to talk about what entrepreneurship entails.