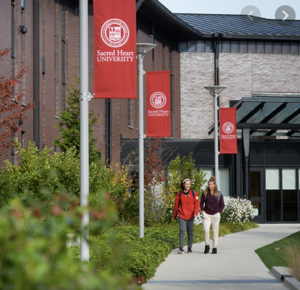 FAIRFIELD, Conn.—Video games are the next classroom, and Sacred Heart University students and alumni are at the forefront of that evolution, creating science-themed games for middle school students.

Bob McCloud, a professor in the School of Computer Science & Engineering, hired SHU students to develop interactive, educational video games specifically for middle schoolers to play on Google Chromebooks. The SHU students are employees of The Beamer, LLC, a Connecticut based transmedia startup. The Beamer is led by Peter Solomon, a physicist and colleague of McCloud’s.

A mix of seven undergraduate students and newly graduated computer science students are developing the games remotely at home. Each student has a specific role: one is writing code through C# (a programming language); another is converting graphics from 3D to 2D; a third is working on animation; a fourth student is in charge of sound; and the rest are building the game’s story and level design. Students from Becker College in Massachusetts are also collaborating with the SHU team on the project.

“Students are having a great time with this,” McCloud said.

Andrea Toth, 20, a junior from New Jersey, is a story developer and level designer for the game. She said she loves video games and wants to get as much experience as she can in the field.

“Even though my work just started, I am learning a lot about how to use Unity [a cross-platform game engine] and other game-design software and terms,” Toth said.

One video game (as yet unnamed) involves chemistry composition. Players start by choosing one of six characters. The character’s spaceship lands on Earth 66 million years ago, and the player soon befriends a skittish velociraptor, but it runs away.

Anxious to learn why his new friend fled, the character proceeds to look for the dinosaur. To advance through the levels and find it, the player must solve a series of quests and puzzles, all of which deal with chemical compositions.

“Each time a player completes a quest, a door opens for the next level,” McCloud said. “The player gets to wander around and eventually solves the mystery of the velociraptor’s sudden disappearance.”

These games are under development for WebGL—a cross-platform software for rendering 2D and 3D graphics, with assets stored on the cloud, rather than a computer, so they can run easily on Chromebooks. Since Chromebooks do not have the same level of power as a computer, McCloud and the students had to learn a new type of development.

McCloud said the team is dedicated to the project. Students communicate daily and meet virtually three times a week to continuously share ideas. One of the students working on story development has never done it before and is finding the task challenging, yet rewarding.

“They’re learning new skills,” McCloud said. “We’re figuring out a lot of things as we go, and we’re having a lot of fun learning.”

Students can add these new skills to their résumé, along with “published a game.” McCloud said that’s key to their job prospects.

Senior Eric Boehringer, 25, of Clifton Park, NY, who is majoring in game design and development, said he had been interested in putting his skills to the test in a large group setting. “This is a great opportunity for me to get more comfortable working in a team to make video games,” Boehringer said. “I generally work on level design and story, but I’m trying to lay out how the levels will look in the games and how the story flows through them.”

The game enthusiast and story developer and level designer added, “I’ve been learning many things about the processes of fully designing and building a game from start to finish., particularly the importance of having a fleshed-out game design document, communication among team members and proper planning of asset development, especially when working under strict time constraints. There are lots of meetings, planning and communication among level designers, artists, programmers and project managers.”

The development team is working long hours and will continue to test and tweak the games throughout the summer.