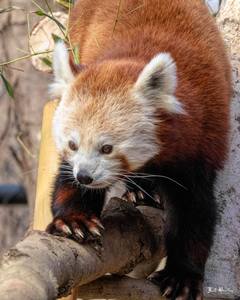 The family at Connecticut’s Beardsley Zoo is saddened to announce the passing of Meri, a seven-year-old female Red panda, on July 27, 2020. The Zoo’s animal care team found that she had passed away in her sleep during the night, with no obvious signs of distress. A post-mortem necropsy showed that the cause was a cardiac condition.

Born on June 27, 2013 at the Detroit Zoo, Meri came to Connecticut’s Beardsley Zoo on January 11, 2018 from the Brandywine Zoo in Wilmington, Delaware. She was named for Meriadoc Brandybuck, a character in J.R.R. Tolkein’s The Lord of the Rings. She was a beloved member of the Zoo family.

“Meri will be deeply missed by all of us here at Connecticut’s Beardsley Zoo,” said Zoo Director Gregg Dancho. “She had a unique personality and related well both to her companion, Rochan, and to her animal care staff. It has been our privilege to have known her for the past two years.

The Zoo remains home to Rochan, a six-year-old male Red panda who has been part of the Zoo family since October 2015. The Natt Family Red Panda Habitat opened in October 2018, a gift from Bob and Helen Natt of Easton, also funded by monies raised by supporters and from the Werth Family Foundation. The Red panda habitat offers indoor and outdoor viewing access for the Red pandas with air-conditioned indoor living quarters and a yard landscaped with bamboo and plenty of treetop spots for sunbathing.

Rochan and Meri were part of the Species Survival Program (SSP), a breeding and management program designed to preserve the long-term sustainability of captive-based animal populations. Connecticut’s Beardsley Zoo will work with the Association of Zoos and Aquarium’s (AZA) Species Survival Plan to identify another female Red panda as a new companion for Rochan.

Red pandas are not true pandas, rather, they are a unique species whose name “panda” is derived from a Nepalese word ”ponya,” meaning “eater of bamboo.” Like many in the Connecticut’s Beardsley Zoo’s animal collection, the Red panda is threatened in the wild by territory loss and fragmentation, resource depletion, and are frequently hunted for their beautiful fur.

Spend the day a world away! Connecticut’s only zoo, celebrating its 98th year, features 300 animals representing primarily North and South American species. Guests won’t want to miss our Amur tigers and leopards, maned wolf family, and Mexican and Red wolves. Other highlights include our new Spider Monkey Habitat, the prairie dog exhibit, and the Pampas Plain with Giant anteaters and Chacoan peccaries. Guests can grab a bite from the Peacock Café and eat in the Picnic Grove. Connecticut’s Beardsley Zoo is a non-profit organization approaching its 100th year at a time when the mission of helping fragile wildlife populations and eco-systems is more important than ever.

The Zoo reopened on June 1 at 50% capacity. Tickets must be purchased on the Zoo’s website at beardsleyzoo.org. Face masks are required for everyone over the age of two, with the exception of those with medical conditions that preclude wearing them.