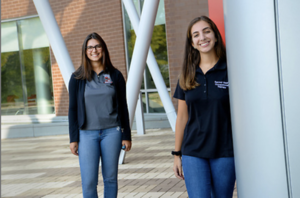 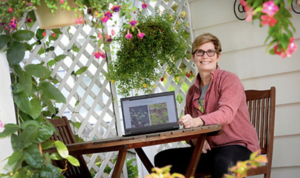 Laurie Weinstein, 53, suffered a brain hemorrhage five years ago, permanently paralyzing her right arm. She also suffers from aphasia (difficulty with speech), but what’s most debilitating for this Bridgeport resident is her inability to live out her creative career as a photographer. Thanks to a relationship Weinstein has with SHU, two OT graduate students, Julia Cipriano and Cassie Gluck, made Weinstein a website to showcase her photography. This was a dream come true.

For years, Weinstein shot and developed photos as co-owner of a custom photo lab, Photographic Solutions, in Norwalk. Even in the early 2000s, when the photo industry took a hit from new digital trends, Weinstein found ways to connect with customers.

“She loves it,” said Claudia Zahorsky, Weinstein’s wife. “She loved her business. She loved being in the darkroom; she loved developing and enhancing. That was her strong suit.”

Tragedy hit in December 2015, when Weinstein had a stroke. A lengthy stay in the hospital was following by months of rehabilitation in a specialty health-care facility.

Weinstein not only had to heal from her traumatic health experience, but she also had to come to terms with her new normal. In March 2016, Weinstein left rehab and moved back home.

As the couple worked through their new realities at home, they learned from their close friend and SHU employee, Tracy Deer-Mirek, about an interesting opportunity. The University’s speech-language pathology (SLP) and OT program was looking for stroke survivors to help and learn from.

For more than three years, Zahorsky drove Weinstein to SHU for weekly therapy appointments with SLP and OT students and faculty, including the driving simulator clinic. “When I drop her off, I know she’s in good hands,” Zahorsky said. “The program enabled me to have my own time.”

With the pandemic, unfortunately, the visits had to stop. However, Sheelagh Schlegel, a clinical assistant professor who taught an occupational therapy course in health promotion, prevention and well-being class in the late spring semester, found a way to keep Weinstein engaged and involved.

Schlegel’s course provides a deep understanding of OT’s role in health promotion, practice and disease or disability prevention. Schlegel asked Weinstein if she would help two students in the class.

“One of the class assignments was a service-learning project, and we were asked to help someone with something related to health promotion and well-being,” said Cipriano, a second-year OT graduate student from White Plains, NY. “We met with Laurie first to get to know her and to understand what she wanted from the website we were going to create for her.”

“Julia and I researched how to create a website and found free websites to help us do so,” said Gluck, a second-year OT graduate student from Atlantic City, NJ. “We kept in touch with Laurie throughout the project, and we were constantly getting more photos to add into the website.”

They also provided Weinstein with a video that explained how to edit the website and add more photos, so she could continue to make changes.

Zahorsky said Weinstein was excited. “They had a Zoom call once a week,” she said. “All they did was laugh.”

Even with Weinstein’s reduced speech capabilities, she provided the students with her vision on the video calls and then they brought it to life. “This really lit a spark in her,” Zahorsky said. “This project gave her the feeling that she was working again. She felt creative, and it put a smile on her face.”

“I really enjoyed working with Laurie and getting to know her,” Cipriano said. “Her photos are really beautiful, so it was a lot of fun to look through them. I think this experience will help me communicate better with future clients. As future occupational therapists, it is important to look at all clients holistically. I learned the importance of interests and how valuable they are to each individual.”

The project also gave Gluck and Cipriano the opportunity to make someone happy. “Occupational therapy is a specifically unique career,” Gluck said. “It allows you to create a unique bond with the people you are working with and incorporate the things that they truly care about into their rehab to help them get better.”

At Weinstein’s photo lab business, she mentored high-school and college students who were interested in the visual arts. She provided guidance and hands-on experience. Her involvement with Sacred Heart put her in the reverse situation: the students were teaching her.

“Every person at SHU has been amazing,” Zahorsky said. “They are so kind and passionate.”

Not only were the staff, faculty and students helpful and friendly, but Weinstein also befriended other patients. They have a little group and get along well, Zahorsky said. “It’s really remarkable.”

This project enabled Weinstein to show people she’s still here and she’s still creative. It gave her confidence and made her feel like she could work again. After her stroke, creating and updating a website didn’t seem possible. Now Weinstein said she hopes Post-Stroke Photography serves as a reminder that if she can do it, other stroke survivors can pursue their dreams, too.

“Every day is a blessing,” Zahorsky said. “She’s happy.”

Weinstein nodded and smiled in agreement.