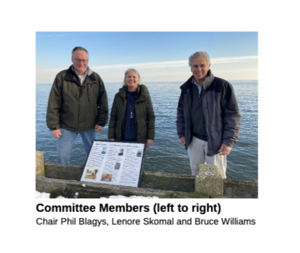 Black Rock, CT - The History Committee of the Black Rock Community Council has completed its first marker as part of a planned series of historical pictorial markers detailing Black Rock’s history as it relates to Long Island Sound. The markers, situated along the walkway at St. Mary’s by the Sea, will replace existing markers placed in 2007 by local resident Colin Nevins as part of his Eagle Scout project for local troop BSA 38.

Upcoming markers will describe the history of Black Rock Harbor beginning with Black Rock’s original inhabitants, Black Rock’s role during the British invasion and subsequent burning of Fairfield in 1779, and St. Mary’s during the Gilded Age including the story of the George Hotel.

“We are very excited to launch this project and we look forward to visitors to this beautiful park enjoying this pictorial marker and those that follow for many years to come”, says BRCC History Program Chair Phil Blagys.