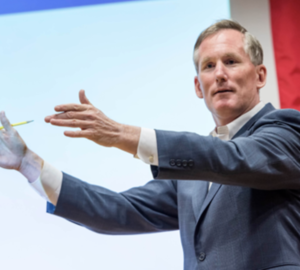 FAIRFIELD, Conn.—Sacred Heart University alumnus Brian Hamilton ’87 is an executive producer and stars in a new ABC television series, Free Enterprise, which follows formerly incarcerated people as they pursue their dreams to start their own small businesses.

Hamilton is a lifelong entrepreneur, philanthropist, and leading national voice on the power of ownership to transform lives, combat recidivism and help all have access to the American dream. He founded Sageworks, one of the country’s first financial technology companies, and holds several patents on products used in most financial institutions across the country today.

Since selling Sageworks to a leading private equity firm in 2018, he has immersed himself in philanthropy. He created the Brian Hamilton Foundation, which oversees several nonprofit programs aimed at teaching people the skills they need to become successful in business and make entrepreneurship education accessible to all. One such program is Inmates to Entrepreneurs, the longest running program of its kind in the United States, which guides formerly incarcerated people as they launch their own small, low capital businesses. He also served on SHU’s board of trustees for a number of years.

Free Enterprise will share the journey of people who have struggled to find consistent employment because of their criminal records. They will work with Hamilton and his team of fellow business experts and mentors to launch enterprises with low or no capital, providing a real-time view of product development, pricing, marketing and customer service. And, along the way, viewers will see inspirational stories of self-reliance, hope, redemption and transformation.

“There is no larger and more unifying proposition in our country than the idea that everyone gets a second chance,” said Hamilton. “Free Enterprise demonstrates that judicially-involved people can take part in a most important part of the American dream: having ownership. On the show, you will see real people starting simple businesses to become part of the American tapestry.”

To watch Free Enterprise, viewers can tune in on Saturdays, starting April 3; check local ABC listings for airtime. Learn more about the show in this promotional video.