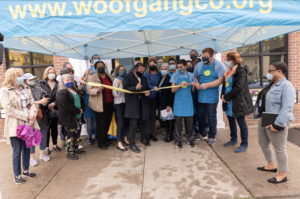 Team Woofgang & Co. is a non-profit organization empowering adults with disabilities (known as team members) through a wide variety of vocational skill sets learned through production, packaging, marketing and selling of high quality pet treats and novelty items. Team Woofgang’s goal is to continue to meet the significant demand for these services with the opening of this new facility.

“The opening of this facility is a milestone,” said Stern. “It will enable Team Woofgang to provide additional hours of vocational training and job skills development to more adults with disabilities. We are deeply grateful to our donors, partners, and volunteers.”

Mayor Ganim emphasized Stern’s sentiments, “It’s a milestone for Team Woofgang but also for Black Rock as well. While this is the opening and start of something new, Team Woofgang is already a success story,” Mayor Ganim remarked.

Team Woofgang’s team members participated in the event and gave the Mayor and Council Representatives a personal tour of the facility which features commercial grade equipment and spaces designed to accommodate people with a variety of skill and ability levels.

Team Woofgang & Co. is a non-profit organization empowering adults with physical, intellectual and developmental disabilities. Team Woofgang’s curriculum offers training tailored to the unique special abilities of each team member. By enhancing individual skills they achieve the invaluable sense of worth felt when independent, successful and productive. For more information please visit https://www.woofgangco.org/