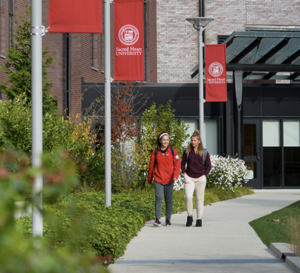 FAIRFIELD, Conn.—Sacred Heart University educator David Thomson, assistant professor of history, has received a $6,000 summer stipend from the National Endowment for the Humanities (NEH) toward his research on 19th-century American capitalism.

The NEH, which is a federally funded, independent agency, is a highly competitive program and one of the largest providers of funds for humanities programs in the United States, according to its website.

This grant will support Thomson’s research on how states’ debt defaults shaped the development of the national finance system in the U.S. from the 1830s through the 1870s. As he already has completed international research in England, France, the Netherlands and Germany to explore how international banks reacted to the defaults, he intends to use the summer stipend on research throughout the U.S. He is planning three trips, looking to access archives in North Carolina, Washington, D.C., Mississippi, and Louisiana during the summer of 2022, when travel should be safer than it has been during the COVID-19 pandemic.

Thomson’s research will culminate in a book, On Anti-Bondsman On!: Debt Default and the Perils of 19th Century American Capitalism, which will serve as a sequel to his earlier project, Bonds of War, due to be released in the spring of 2022 with University of North Carolina Press. While his first book focuses on national debt derived from the Civil War, On Anti-Bondsman On! will look at financial implications from before and after the war. It will begin with the rise of King Cotton (a reference to the vital role cotton played in the southern states’ economy), the desire to emulate the Erie Canal regarding internal improvements, and the intertwining of legislative leaders with the leadership of financial institutions. It will conclude with the international reaction to debt default during the Reconstruction era.

Though Thomson’s books are about the 19th century, they remain relevant. With two large-scale, financial recessions occurring over the last two decades, historians have begun to revisit the role of capitalism in American society. The current global pandemic has created a fiscal crisis that will have a lasting impact for years to come, and the United States already faced significant financial concerns well before it started. Examining state debt default will provide a better understanding of the long evolution of debt in American life.

“The 19th century was consumed by debt, and so I try to unpack this story and make it accessible,” said Thomson.