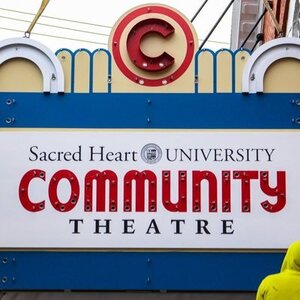 FAIRFIELD, Conn.—Opera luminaries graced the stage at the newly opened Sacred Heart University Community Theatre as people gathered to celebrate the birthdays and legacies of Fairfield’s own Al and Alida Kleban.

“A Celebration of Al & Alida Kleban,” hosted by the couple’s daughter and son-in-law, Betsy and Rick Rathe, honored the couple whose vision has transformed Fairfield center and helped make SHU’s reopening of the iconic theater a reality.

The private spring soirée—attended by friends, family and dignitaries—featured a program by international opera artists Isabel Leonard, Allegra De Vita and William Burden, who were among the first live performers in the freshly imagined theatre space. Leonard, a multiple Grammy-winning mezzo-soprano who performs at The Metropolitan Opera and other venues around the world, presented selections from Bizet and Offenbach. She also joined Burden for familiar melodies from “The Sound of Music” and “Carousel.”

Mezzo-soprano De Vita, a SHU alumna from Trumbull who has performed at the Austin Opera, the Boston Midsummer Opera and Festival dei Due Mondi (Festival of the Two Worlds) in Spoleto, Italy, offered works from Handel and Rossini. Burden, a tenor who treated Fairfield audience to works by Bernstein and Donizetti, has performed at The Metropolitan and San Francisco operas and Teatro alla Scala in Milan, Italy.

All three led the audience in a rousing chorus of “Happy Birthday” for the Klebans. Marie Muhvic, president of the SHU Community Theatre Foundation, praised the couple for joining with the University to preserve the century-old theatre.

In May 2019, SHU partnered with Kleban Properties and the Town of Fairfield to renovate and reopen this crown jewel in the heart of downtown. Over the past year, skilled craftsmen have renovated the former vaudeville theatre and movie, from the expanded stage and proscenium arch to the modern balcony and VIP skybox.

“The Klebans could have turned this space into a chain coffee shop or department store,” Muhvic told the evening’s guests. “Sacred Heart University could have said, ‘We already have a theatre on campus and don’t need to commit to this project.’ Yet both did something that nobody else had done in over a decade. They invested a sizeable amount of resources into purchase, restoration and renovation of the space.”

Plans for the new, 400-seat SHU Community Theatre include a full slate of events in the theatre as COVID-19 restrictions lift and streaming on the theatre’s website, www.shucommunitytheatre.org. Additionally, there will be rental opportunities and academic and youth endeavors in the coming year. Exclusive series will present the Fairfield Film Festival, popular stand-up shows with the Connecticut Comedy Festival and a summer outdoor movie series in partnership with the Fairfield Museum and History Center. Dance and musical performances, children’s afterschool and camp options, live lectures, book talks, master classes and Actor’s Studio-style evenings with leading Broadway performers are in the works.

The theatre’s official public opening will be in September.

In addition, the SHU Community Theatre Foundation has announced formation of The Kleban Talent Fund to attract outstanding speakers, acts and events. To learn more about partnerships and naming and philanthropic opportunities, contact Muhvic at  This email address is being protected from spambots. You need JavaScript enabled to view it. .

First opened as a vaudeville house in 1920, Sacred Heart University Community Theatre is a 400-seat cinema and performance space located at 1420 Post Road at the bustling corner of Unquowa and Post roads in Fairfield, Connecticut. In May 2019, Sacred Heart University and Kleban Properties partnered to renovate and reopen the long-shuttered community theatre as a contemporary arts and education venue and nonprofit. The theatre is home to a unique blend of film, live concerts and performances, lectures, youth programs and academic endeavors. For tickets and more information, visit www.shucommunitytheatre.org.