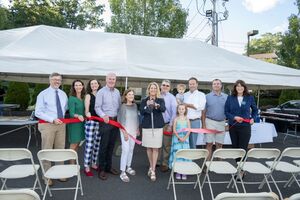 Fairfield, Conn. – The Fairfield Chamber of Commerce is happy to announce that its member, Collins Medical Equipment and Accessibility Solutions celebrated its 90th Anniversary on Friday, September 10th. The ribbon cutting was officiated by First Selectwoman Brenda Kupchick.

Collins is a local business that is still family-owned and continues to operate after 90 years.  Collins Pharmacy was founded in 1931 by Thomas P. Collins, on Fairfield Avenue in the Black Rock section of Bridgeport. Typifying the “corner drugstore” of the era, it was the neighborhood hub with a soda fountain and card table for the locals to gather, plus a prescription counter where all the medicines were compounded by the pharmacist. At that time, there were no “manufactured” drug products.

After serving in the Navy during World War II and graduating from UCONN School of Pharmacy, Tom Collins, Jr., took over at the helm, and in 1963, moved the pharmacy to a much larger facility next door to the original.  The newly renovated store was planned by the McKesson Drug Company and featured the latest in store fixtures and design.

Following in his father’s footsteps, Jack Collins graduated from UCONN School of Pharmacy in 1975 and began to plan for the future of the company by adding a durable medical equipment department, in addition to becoming one of the first pharmacies in the state to computerize their prescription department. In 1983, it became apparent to Tom and Jack that their growing business required a bigger space and improved parking. The Shell gas station down the street was purchased and renovated for the next location. The company continued its rapid growth in home healthcare and quickly outgrew the new location. In 1991, a $250,000 expansion and remodeling effort was undertaken.

In 2002, their prescription department was sold to CVS and they began to focus on Home Medical Equipment and Supplies. In 2005, they sold the building on Fairfield Avenue and moved to the current Collins Medical Equipment store on Kings Highway East in Fairfield.

Understanding the demographics driving the Aging In Place movement nationally, a new division was launched by Jack Collins’ son Bryan Collins in 2012, called Collins Accessibility Solutions.  Bryan started by becoming a Certified Aging In Place Specialist and gained the knowledge and skills to evaluate what your home needs to be safe and accessible. This division includes products and services such as bathroom remodels, ramps, stair lifts, grab bars and patient lifts.

In 2016, shortly after celebrating 85 years of business, a new division named Collins Insulin Pumps & Supplies was started. This created another period of growth for the company and an office and warehouse was opened in Stratford.

Today four generations of Collins’ relatives continue to manage the progress of this family company. This includes Jack Collins-President, Chris Collins-General Manager celebrating 35 years with the company, Tom Collins IV-Finance, Bryan Collins-Sales and Marketing both with over 11 years with the company and Peg Collins Crossin serves as our Clinical Sales Liaison at 500 Kings Highway returning in 2018 after a 14-year period at Saint Vincent’s Medical Center.

The mission of Collins Medical Equipment is to provide high quality, cost effective home medical equipment and disposable supplies for the use and treatment of our patients in the safety and comfort of their homes with reliability, professionalism, and integrity.

“Our success is the result of a simple philosophy my family has followed since 1931, treat your customers with dignity and respect and provide them with a level of product and service they can’t find anywhere else," says Jack Collins. “This level of service is meaningful in the health care industry and has provided us with the positive reputation we have earned and take great pride in throughout the State of Connecticut.”

For more information contact Andrea Hance Collins, This email address is being protected from spambots. You need JavaScript enabled to view it. ;