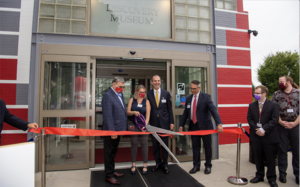 FAIRFIELD, Conn.—At the recent grand reopening of Sacred Heart University’s Discovery Science Center & Planetarium(DSCP), words like “reinvent” and “reimagine” were applied to descriptions of the center’s renovated look and feel.

“What you see here is the Discovery Science Center reimagined,” said Michael Alfano, dean of SHU’s Isabelle Farrington College of Education at the ceremony. He called the center a place where schoolchildren can come for hands-on learning, and SHU education students can sharpen their teaching skills. “The partnership between SHU and the Discovery Science Center & Planetarium expands access so that all children in our region can experience its reimagined interactive exhibits and programs,” Alfano said.

At the reopening event, SHU faculty and staff, community members and state and local officials gathered outside the newly painted red, gray and white building for speeches and the ceremonial ribbon-cutting. Afterward, they toured the interior, interacting with the new, immersive exhibits. Many looked at the revamped planetarium in awe, learned about the history of space at the “hall of space” and took on the role of a dinosaur in the “Be the Dinosaur” exhibit, among other activities. SHU President John J. Petillo said he was excited to open the center to the community and to integrate SHU’s academics as well.

Due to the pandemic, the DSCP’s doors were closed for the past year, though it ran programs virtually. Support from local foundations, the state and Sacred Heart brought about significant upgrades and improvements, making the Discovery Science Center a state-of-the-art facility and a true jewel in Fairfield County.

Robert A. Panza, DSCP chairman, noted the center has been operating for seven decades. It has served the community well during those years, he said, but staff and administration realized during the pandemic that it was time to “reinvent” the center.

“This is a celebration,” Panza said. “It’s an appreciation for our collaboration with Sacred Heart, ensuring a new level of excellence in STEAM (science, technology, engineering, art and mathematics).”

Erika Eng, DSCP executive director, said she’s worked at the center for several years and has seen its many “iterations”; however, the reopening event was “by far the most exciting day” of her career.

Eng said she sees the value, purpose and importance of informal learning institutions in communities, as they truly have an impact. Anyone from age 2 to 102 can learn something at the DSCP. “We want to show people that they shouldn’t be afraid of STEAM,” she said. “The center makes it easy for people—children especially—to learn a concept and apply it. Once you put that concept into practice, it sticks with you forever. That’s what we provide here.”

The center isn’t the only thing that received an upgrade. Thanks to the collaboration with the Farrington College of Education, Eng said, all of the center’s educational programming was rewritten.

“The pandemic gave us the opportunity to restructure the center. Thanks to local foundations, the state and the partnership with Sacred Heart, we were able to reopen and give a breath of life into this facility.”

SHU junior Sydney Worthen-Jenkins, an education major from Boston, MA, said the reopening event was her first time at the DSCP. She toured the facility and interacted with the rocket and paper airplane exhibits. “This is exciting,” she said. “It reminds me of the science museum in Boston. It’s really great for all school-aged children; it helps them understand concepts like physics. It’s also a really great resource for SHU students.”

The center officially opens to the public Saturday, Sept. 25, and people can buy tickets in advance at the Discovery Science Center website.