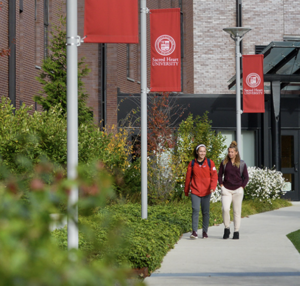 FAIRFIELD, Conn.—A Sacred Heart University assistant professor, David Luesink, has been selected to co-edit a book series focused on the history of health and healing in China.

Luesink is a historian of Chinese medicine. At Sacred Heart, he teaches classes on the history of medicine in China, history of science, East Asian history and modern and late imperial China, as well as general history classes.

“I am excited to be part of this new series of books on the history of health and healing, published jointly by Routledge and the Zhonghua Book Company,” Luesink said. “In the last 15 years, the amount of high-quality research on the history of medicine and health in China has been growing steadily, with major contributions in English and Chinese that have had an influence far beyond historians of medicine. Yet, scholars without the ability to read Chinese have been unable to review important research published only in that language.”

Luesink’s edited volume, China and the Globalization of Biomedicine (Rochester University Press, 2019), illustrates the global evolution of biomedicine, based on developments through the medical field in China between 1850 and 1950. Luesink’s research, both published and ongoing, highlights the significance of the history of anatomy as well as the laboratory research on plague in China.

“This series will completely transform the scope of the existing scholarship available to those without the ability to read Chinese,” Luesink said. “While some Chinese translations of important English books have been published elsewhere, I do not think it is hyperbolic to state that the wholesale translation of important Chinese works on disease, health and medicine into English will forever transform the field.”

“This series will enable medical historians, scientists, public health experts and the general reading public to access previously unavailable, world-class research,” Luesink said. “China played a significant role in creating globalized biomedicine in the past two centuries. This series will make China’s history of disease and health impossible to ignore.”

The two publishing partners will formulate a program called “The History of Health and Healing,” which will include input from international academics and esteemed Chinese scholars. The series will be dedicated to interdisciplinary books of medical science and social history.