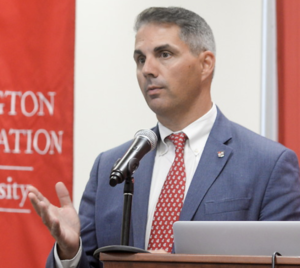 FAIRFIELD, Conn.—Sacred Heart University’s dean of the Farrington College of Education (FCE), Michael Alfano, is taking on the role of vice provost for strategic partnerships, developing public and private sector connections while maintaining his current responsibilities.

In his expanded role, Alfano will solicit market and employer information to guide academic decisions and connect external organizations with SHU’s division of academic affairs. He reports to Provost Robin Cautin, serving as an ambassador for academic affairs to identify specific educational and training needs in the marketplace. He will work with SHU’s academic departments to meet those needs.

Since Alfano came to the FCE nearly four years ago, he has enhanced the status of the college through his hands-on approach to program development, and his vision about the role of the college and faculty across the university and within the community. He is responsible for several grants related to the redesign of the FCE’s teacher preparation program and for the inception of the college’s first Ed.D. program (a member program of the Carnegie Project on the Education Doctorate). The program, which began in the fall of 2019, focuses on social, emotional and academic leadership (SEAL), and is among the only doctoral programs of its kind in the country.

Alfano, a Wallingford resident, has been the FCE’s dean since 2018. Previously, he served as dean of the School of Education and Professional Studies at Central Connecticut State University in New Britain. where he helped create its center of excellence in social and emotional learning and its teacher leadership fellowship program.

“I am incredibly grateful and excited for the opportunity to expand my role here at SHU to include serving as vice provost for strategic partnerships,” Alfano said. “In this new and expanded role, I will be working with the provost and other colleagues to champion existing initiatives and to seek out and secure new and meaningful partnerships that will enhance outcomes for our students while advancing our University’s presence in the state, region and nation.”

Alfano also will chair a committee that University President John Petillo recently created to design and coordinate University outreach and partnerships with external organizations. The committee will ensure that the University maintains a unified voice when proposing and negotiating partnerships.