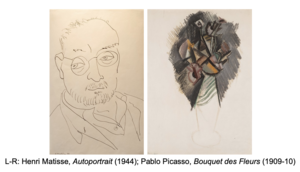 Both works bracket the high period of European Modernism and underscore the direction for the New Bruce set by the Bruce Museum’s Susan E. Lynch Executive Director and CEO Robert Wolterstorff: to focus on the trajectory of Modernism, from the Impressionists in France and the United States to the global phenomenon of contemporary art in our own time.

“Words can’t express how thrilled I am to have these two powerful works enter the Bruce collection,” said Mr. Wolterstorff. “Together they send a strong signal of the direction of the New Bruce as a museum that explores global stories of Modern and Contemporary art. I’m profoundly grateful to William Richter for all of his support for the New Bruce, and especially now for this extraordinary gift of art.”

The Picasso painting on paper, Bouquet des Fleurs (Bouquet of Flowers), dates to 1909-10, an early period in the artist’s career when he was pioneering a Cubist style. “This gouache reflects the nascent aesthetics of Cubism, including the complex fracturing of form and space that would become the hallmarks of his career,” said Bruce Museum Curator of Art Margarita Karasoulas. “It is a transformative addition to our holdings of Modernism, especially our works on paper.”

The Matisse Autoportrait (Self-Portrait), a line drawing in black ink on paper, dates to 1944, near the end of the artist’s career. It is the first work by Matisse to enter the Bruce’s collection. “Matisse produced only a small number of painted and drawn self-portraits throughout his prolific career,” noted Ms. Karasoulas. “Completed toward the end of his life, this drawing reveals a remarkable economy and elegance of line. With only a few elemental strokes of the pen, Matisse masterfully expresses his identity as an artist.”

Mr. Richter, who has also generously made a lead $15 million gift towards the new Art Wing that will bear his name, will be honored at this year’s Bruce Museum Gala, “Framing the Future,” on May 14. For over 30 years, the Bruce Museum Gala has been a highly anticipated spring event that benefits the Museum’s programs and operations, with this year’s theme inspired by the vision of the New Bruce.

The announcement of Mr. Richter’s gift follows the recent news of a promised gift from a private collector of 70 works of American and European painting, sculpture, and works on paper.

About the New Bruce

Located in Bruce Park overlooking Greenwich Harbor, the Bruce Museum is a community-based, world-class institution that offers a changing array of exhibitions and educational programs to promote the understanding and appreciation of art and science.

For over a century the Bruce Museum has delighted and engaged its visitors by presenting exceptional exhibitions in art, science, and the intersections between the two disciplines.  In 2019, the AAM-accredited Museum broke ground on its current expansion project, which will take the building from 33,000 to over 70,000 square feet. The New Bruce will feature state-of-the-art exhibition, education, and community spaces, including: a changing gallery for art and five new permanent galleries in the new William L. Richter

Art Wing; a changing gallery for science; a new permanent science exhibition, Natural Cycles Shape Our Land; three new classrooms in the Steven and Alexandra Cohen Education Wing; and a bistro, an auditorium, and grand hall. The new building connects the Museum to its picturesque setting in Bruce Park in a dramatic new way. The New Bruce campus will feature a sculpture-lined, landscaped walking path and inviting spaces for relaxation and contemplation—natural enhancements to Bruce Park and an anchoring connection to the retail hub of Greenwich Avenue. The grand opening of the New Bruce is planned for spring of 2023.