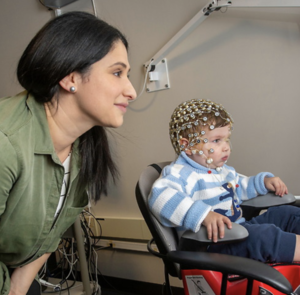 Schoen Simmons, who teaches in the department of communication disorders, will apply the funds to a project entitled, “Behavioral and Neural Measures of Spoken Word Recognition in Late Language Emergence.” The study will evaluate how very young children process spoken words and will attempt to identify early behavioral and biological clues about why some toddlers fail to acquire a spoken vocabulary in a typical timeframe.

“The NIH grant mechanism is a highly competitive process; fewer than 20% of submitted grants are typically awarded,” said Maura Daly Iversen, dean of SHU’s College of Health Professions. It is a great achievement for Dr. Simmons so early in her career. Moreover, this specific grant includes and supports student engagement, providing rich learning opportunities for our communication disorders students.”

Undergraduate and graduate students from SHU’s department of communication disorders will be paid members of Schoen Simmons’ research team, working in collaboration with specialists from the University of Connecticut and Haskins Laboratories in New Haven. Students will gain experience with cutting-edge technologies and work with nationally recognized experts in the fields of infant and toddler neuroscience, cognitive science and child development.

The information collected in Schoen Simmons’ study will yield the critical first clues in understanding which toddlers are at greatest risk for long-term language difficulties.

“Late talkers are at higher chance for academic and social challenges compared to their peers. Understanding the factors for high-risk late talking toddlers can help clinicians and politicians better allocate the scarce resources available to children in early intervention,” Daly Iversen commented.

Schoen Simmons’ study will include more than 100 toddlers, divided into three groups. The first group will encompass 18- to 35-month-olds who have good cognitive abilities, motor skills and receptive language skills but are not developing spoken words at the same rate as typical children, these are the late talking toddlers.

The second group will comprise typically developing toddlers in that same age range.

Toddlers in the final group will be 12- to 18-month-olds with expressive vocabulary skills similar to those of the older study subjects who are late talkers. Studying the younger children will help determine whether the late talkers deviate in their development or if their language development is simply delayed, Schoen Simmons said.

The research project includes two components. The first, already in progress at Haskins Laboratories, looks at brain-level processing. Study participants are fitted with an electroencephalogram (EEG) cap and then watch a silent movie while continuously hearing words repeated in random order.

“Our brain is rapidly firing neurons as we hear spoken words. These neurons release electrical energy, some of which seeps through the skull and into the scalp. The EEG cap records this electrical activity,” said Schoen Simmons.

A sample of the collected brain waves trains a machine learning algorithm. The algorithm picks out features of the brain’s electrical signal that correspond to each word a toddler hears while wearing the EEG cap.

The project’s second component will incorporate eye tracking. Toddlers will be presented with two images on a computer screen and will be asked to look at one of them. Researchers will track their eye movements as they hear a word unfold over time.

“This is a behavioral measure of language comprehension that also gives insight into how vocabulary words are organized in a toddler’s mind,” Schoen Simmons said, noting that eye tracking also can reveal how quickly children are able to process words.

Schoen Simmons said she hopes her study will provide foundational knowledge of how early language processing difficulties can be detected in toddlers and how those difficulties might be represented behaviorally, as well as in the brain.

“Improved understanding of both the behavioral and brain level mechanisms of language processing will help us create more sensitive clinical assessments and interventions to support these toddlers over the course of development,” she said. “If we can identify the toddlers at greatest risk for long-term language impairment, we can employ very targeted interventions early, to ameliorate symptoms and hopefully change that developmental trajectory.”