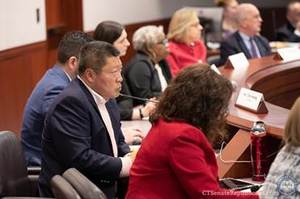 The forum opened with a rousing address by Governor Ned Lamont and continued with a keynote presentation entitled “The Future Works: Connecticut’s Economy on the Rise” by Dr. Jeffrey Thompson, Director of the Boston Fed’s New England Public Policy Center, that focused on the current state of the economy, the state's changing population, implications for key employment sectors, and the need for systems to work to address these new challenges.

Dr. Thompson highlighted some interesting statistics during his address that included the following:

You can watch the full forum on CT-N here.

“I am very excited to be joining this timely and critically important forum. Times are changing, and we need to keep up in order to use that change to our advantage. I want to thank the Steven Hernandez for putting this bipartisan and comprehensive group of leaders together and I look forward to our discussion and policy changes to address the challenges that lie ahead,” said Sen. Hwang.

As a panelist, Senator Hwang emphasized expanding youth internship programs to gain valuable real life experience, apprenticeship and alternative skill development in addition to Housing availability and accessibility. Ultimately, the advisory council presentation discussed the ways in which key stakeholders can work together to harness the changing landscape of Connecticut’s economy to provide opportunities for growth.

State Senator Tony Hwang represents Connecticut’s 28th Senate district representing the towns of Fairfield, Westport, Weston, Easton, Newtown and Sandy Hook and also serves on the 2Gen Advisory Board and as the minority leader on the Higher Education & Employment and Public Safety Committees.