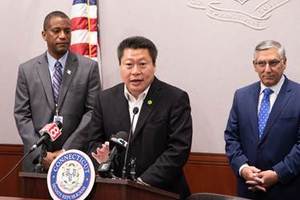 State Senator Tony Hwang applauded the bipartisan passage of House Bill 7200 in the State Senate. The bill, proposed in order to raise awareness of the negative health effects of nicotine and tobacco on younger individuals, would raise the age to purchase tobacco products, cigarettes, and electronic nicotine delivery products, or vaporizers, from 18 to the age of 21. The bill would also increase enforcement on those who sell to minors.

Senator Hwang emphasized his respect of individual freedom of choice for those 21 years or older to make their own personal decisions, without government mandated policies. However, with the skyrocketing youth use of “vaping”, a practice we still don’t fully understand the consequences of, among young people in Connecticut and the United States compelled him to support the legislation. “Anyone age 21 years or older is entitled to freedom of choice, but I believe it is our job to protect young people under 21 years old from those wishing to profit at their expense,” said Hwang.

HB 7200 is intended to protect our youth. Medical science has proven that brain function and physical health is severely impacted in those using nicotine that have not yet fully developed. According to the 2017 Youth Tobacco Surveillance Report, among teens who reported using electronic cigarettes within the last 30 days, 59.3% said they obtained them “From a Friend”. This bill seeks to lessen the chances of teenagers obtaining tobacco and vaping products from friends and classmates who are already 18 years old.

“The prevalence of e-cigarette use and vaping among our younger population is a very serious and alarming issue. These products are often marketed to young people in a similar manner as the Joe Camel cartoon from Camel Cigarettes that was banned many years ago,” said Senator Hwang. “The development and marketing of flavors like bubblegum and cotton candy are targeted squarely at younger potential users. Furthermore, these companies market their products as a ‘safe alternative’ to cigarettes when in reality, they are not. These devices often contain higher amounts of addictive nicotine than cigarettes, and we are creating a pipeline of younger users vulnerable to damaging lifetime health effects.”

Hwang also urged caution about possible correlation between vaping and marijuana use, “I am also very concerned about the finding from the 2017 Connecticut Youth Tobacco Surveillance report that more than half of e-cigarette users had used their vaping devices for substances other than nicotine, including marijuana and THC oils.”

The American Cancer Society (ACS) emphasized that effective Tobacco 21 legislation should include alltobacco products, including, but not limited to, electronic cigarettes and should also provide for public education, training for retailers, and enforcement measures related to retailer licensing.

Bryte Johnson, ACS Director of Government Relations and Advocacy added, “Senator Hwang has been a leader in this effort for four years and we are gratified and thankful for his continued support and leadership. He has been instrumental in helping educate members on both sides of the aisle on the dangers of tobacco use and the proven tobacco control programs that help people quit and prevent countless others from ever starting.”

“The data show that e-cigarette use is hurting the progress we have made when it comes to controlling tobacco use among teens. We need to act now to ensure that this epidemic is stopped in its tracks,” added Hwang.

The House passed HB 7200 124-22 and the Senate 33-3. It now heads to the desk of Governor Lamont for final action, who has expressed support for the bill.

You can find the video of Senator Hwang’s participation in the February 18th Senate Republican Press Conference on Health & Safety HERE.