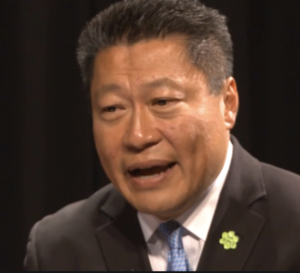 Per the CT Mirror, as of Wednesday Aug 5, “The chair of the Public Utilities Regulatory Authority (PURA) says that Eversource Energy badly underestimated the threat of Tropical Storm Isaias by preparing for between 125,000 and 380,000 outages, while more than 800,000 customers lost power at the peak and nearly 600,000 still were in the dark Wednesday night.”

Senator Hwang has been in constant communication with his district’s senior centers, town halls and emergency command centers to offer support and assistance as they struggle to recover from Isaias and maintain their services.

Gov Lamont chided that CT Utility Companies should have learned from Superstorm Sandy, and the supposed “hundreds of millions invested” that might have limited the scale of damages from Isaias. “But 10 years later,” Mr. Lamont said,” this is one of the worst outages we’ve ever had. To be blunt, I don’t see much progress made for all the investments we’ve made.”

Gov. Lamont has called for a PURA investigation into the "wholly inadequate" make safe and restoration efforts. “I want to hear a lot more urgency,” Mr. Lamont said. “I want to get this thing solved in 72 hours.”

Senator Hwang concurred, “I want to add my voice to Governor Lamont's sense of urgency to resolve the power outages and join him in his call for PURA to investigate our utility companies’ disaster preparedness and how poorly they are handling the aftermath of this storm.  People’s frustrations are compounded by the lack of communications and customer support by our utilities.  This failure is a betrayal of the public trust and a dangerous issue of health and safety during the current Covid-19 pandemic."