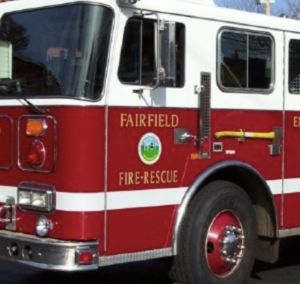 FAIRFIELD, CT: The Fairfield Emergency Communications Center received phone notification from a fire alarm monitoring company reporting an activated fire alarm at 351 Springer Road. Car 3 arrived on the scene within 4 minutes of dispatch and reported smoke in the home. Engine Five and Ladder 2 also arrived on scene within five minutes of dispatch.  Ladder 2 crew, led by FF Tim Ward forced entry to the home at the locked front door and began a search for trapped occupants. Engine 5 crew, under the command of LT Mark Harry made entry to the home, and located, attacked and extinguished the fire they encountered on the first floor. The rapid search of the home by Ladder 2 personnel revealed no one was home.

"Early detection of the fire by smoke detectors, combined with a rapid response by staffed Fire Companies helped limit this fire to the room of origin" said the Incident Commander Assistant Chief Caisse. The Fairfield Fire Department reminds homeowners that rapid response times by staffed firefighting forces are essential in quickly controlling fires. Modern home furnishings consist largely of synthetic materials, which burn much hotter and faster than natural materials. This rapid release of heat and fire quickly fills a home with heat and toxic smoke, severely limiting the occupants time to escape.

No Firefighters or civilians were injured. The fire is currently under investigation by the Fairfield Fire Prevention Division.