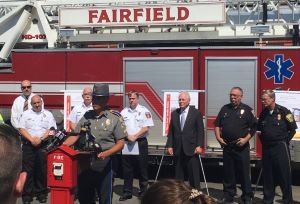 Last Saturday night, a CT State Police Trooper was seriously injured when struck on I-95 while rendering aid. This incident is part a growing trend on limited access highways.

Fairfield Fire Chief Denis McCarthy stated, “I-95 and the Merritt Parkway represent one of the most dangerous environments that First Responders must work in. It is our goal to spread the word locally, regionally, and statewide to encourage motorists to slow down and move over when approaching accident scenes and highway maintenance work zones. It adds only seconds, but may save the lives of those whose job it is to work and render aid on the highway.”

According to the US DOT Federal Highway Administration, traffic crashes claim the lives of more law enforcement personnel than any other cause of death in the line of duty. "Struck-bys" are the 2nd leading cause of accidental law enforcement officer death and account for 20% of on-duty firefighter deaths per year.