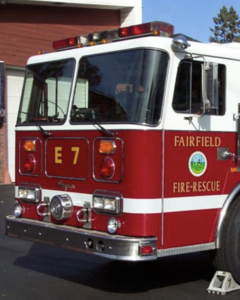 Fairfield, CT - On Wednesday afternoon Feb. 19 at approximately 2:26pm, the Fairfield Emergency Communications Center received a call reporting a brush fire on the embankment of I-95 northbound between Exit 18 and Exit 19. Fairfield Fire Department Engines 1, 3 and 4, Car 3 and Car 2, and Squad 14 responded and arrived on the scene at approximately 2:44pm. Units found a large brush fire spreading across approximately three acres.

Units worked from multiple locations to establish a water supply to battle this stubborn fire. Traffic on the northbound side of I-95 was briefly stopped but quickly re-opened. The fire was declared under control at 3:15pm.

At the same time Fairfield units were at the scene of this fire, Westport Fire units were extinguishing another brush fire on I-95 in the area of the exit 18 Sherwood Island connector.

Connecticut State Police and the State Farm Safety Patrol assisted both Fairfield and Westport Units on I-95.

One firefighter was transported to the hospital by AMR with minor injuries.

The cause of the fire is still under investigation.