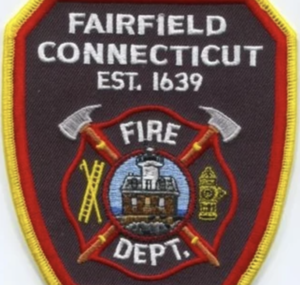 Fairfield, CT - On Wednesday night, November 18 at 9:28 PM, the Fairfield Emergency Communications Center (ECC) received a call from a neighbor that smoke was coming out of a two-family home located at 20 Bloomfield Drive. Fairfield Engines 1, 2, 3, 4, 5, Ladder 2, Rescue 1 and Car 3 responded. Car 3 arrived on scene and reported a working structure fire. Smoke was visible on the first floor and attic eves of the building. The fire apparently started in the basement crawlspace and extended through a large wall void and pipe chase up through the first and second floor and into the attic. The wall void was located in the center of the building and the fire extended into both living units of the two-family home.

Fairfield Firefighters aggressively attacked the fire, advancing hose lines into the basement crawl space, and first and second floors of both units. Firefighting efforts were complicated by heavy smoke, multiple building renovations, and access challenges. Firefighters from Bridgeport FD and Westport FD were called to the scene to assist Fairfield FD with suppression efforts.

A “May Day” was called when a Fairfield Firefighter's (assigned to Engine 3) air ran low while fighting the fire and was briefly trapped on the second floor. Fellow firefighters quickly rescued their brother firefighter, who had found his way to an open window, by raising a ladder and helping him down. The firefighter was uninjured and resumed work on the fire at ground level after being examined by AMR paramedics on scene.

All occupants had exited the building prior to FD arrival. The owner and resident of one side of the duplex reported that he had a very large tropical fish tank on the first floor and kept valuable tropical birds in a room on the second floor. Firefighters located and protected the birds in place, closing the door to the room, opening windows, and using special meters to ensure the air inside the room was safe for the birds to breathe. Once the fire was under control firefighters assisted the owner in removing the birds to safety.

UI responded to the scene and shut down electrical power at the nearest pole, which affected several other homes in the area. Power was restored by United Illuminating to other homes affected by the shut off a little after midnight. Electric power will remain off for the home that suffered the fire.

The electrical power outage threatened the tropical fish who depend on the aquarium heater and filter for survival. After the fire was safely under control, Fairfield Firefighters secured emergency power for the fish tank with the help of Southport Volunteer Fire Dept., which provided an emergency generator that firefighters used to maintain the filter and the heater, to keep the fish alive.

According to Asst. Chief George Gomola, the incident commander, firefighters worked very hard to save the structure, the tropical birds, and the things of value important to the residents. Gomola expressed sincere gratitude for the help and hard work of all the firefighters who responded to the scene, the quick response from UI, and the support received and care provided by American Medical Response (AMR).

“This was a dangerous, stubborn fire that was very difficult to extinguish. Only the hard work and extreme professionalism demonstrated by our Fairfield firefighters, our brother and sister firefighters Bridgeport and Westport, who responded to our request for assistance, kept the fire from completely consuming this building and threating surrounding homes.  We are very grateful the “Mayday” was quickly resolved and that no firefighters or civilians were hurt or injured. We continually practice and prepare for firefighter rescue, and tonight that training paid off.  Many thanks to our mutual aid partners from Easton and Norwalk FD, and to our Southport Volunteer Firefighters who manned our fire stations during the fire, and to Fairfield PD for providing traffic control and safety during the fire," Gomola said.

The cause of the fire is under investigation by the Fairfield Fire Marshal’s Office with assistance from Town of Fairfield Building Official Tom Connelly. Both units of the duplex dwelling were damaged by fire and the occupants moved until repairs can be performed.