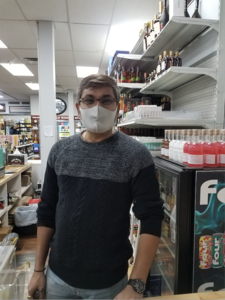 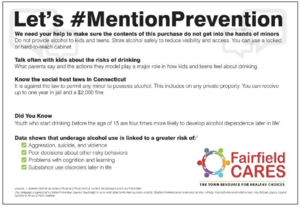 Fairfield, CT - During the months of November and December, in conjunction with the Fairfield CARES Community Coalition, Fairfield’s liquor stores opted into the “Let’s #MentionPrevention” program to remind parents and other adults of the dangers of underage drinking.

Fairfield CARES is the designated local prevention council and youth and young adult substance prevention coalition for the Fairfield community. The coalition’s most recent data showed that 31% of Fairfield’s high schoolers drank alcohol in the past month, ranging from 16% in ninth grade up to 51% in 12th grade. Liquor store owners are often the front line in defense of the Connecticut underage drinking laws and can be frustrated by some parents and community attitudes. “I wish more people would take it more seriously” said Mike Urban from the Wine Zone.

In a proactive partnership with Fairfield CARES, Fairfield’s liquor stores enthusiastically assisted in the educational “Let’s #MentionPrevention” outreach initiative. In addition to vigilantly checking IDs, even asking consumers to pull down their mask momentarily to match face with driver’s license picture, store employees inserted a flyer into the consumer’s bag that reminded adults of the CT Social Host laws, and the importance of talking to kids about underage drinking. As Junior from Villa Wine & Spirits stated, “it’s all about trying to keep families safe”. The response from Fairfield businesses was overwhelmingly positive. Keval from Pequot Liquors noted “We appreciate what Fairfield CARES does” and Mehul Patel, owner of Fairfield Wines & Spirits said “Happy to work with Fairfield CARES”.

While underage drinking has been in decline in recent years in Fairfield, youths who drink are at greater risk for experiencing problems in school, physical or sexual assault, car crashes and cognitive impairment. According to the National Institute on Alcohol Abuse & Alcoholism, youth who start drinking before the age of 15 are four times more likely to develop alcohol dependence later in life.

For more information on Fairfield CARES please visit our website at ww.fairfieldct.org/fairfieldcares.