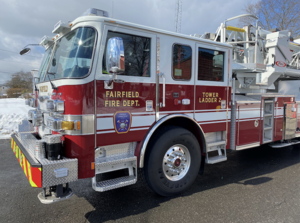 FAIRFIELD, CT - At 4:33 A.M., Thursday, Feb. 11, the Emergency Communications Center received a report by a resident of a fire on the second floor at a three-family residence at 556 Black Rock Turnpike. The Fairfield Fire Department responded and arrived on scene within four minutes of notification. At the time of arrival, the exact location of the fire was unknown. During an interior search, firefighters located two small fires in separate locations, while residents awoken by the smoke detector’s alarm attempted to make contact with others still asleep in the multi-family residence.

Firefighters from Ladder Company Two forced entry into a first-floor apartment to awake a still sleeping resident and escorted her to safety.   Engine Two, under the command of LT Robert Delmhorst, arrived on scene and extinguished the two fires. Additional firefighters entered the attic area to expose any hidden fire that may have been advancing to the storage space. American Medical Response arrived on scene and evaluated the occupants for any injuries from smoke exposure, and none were reported. Fairfield’s Fire Prevention Division conducted the origin and cause investigation, assisted by both the State Police Fire Investigation Unit and the Fairfield Police Detective Division. The Red Cross also responded to assist with displaced residents.

Assistant Chief Erik Kalapir stated, “A single functional smoke detector provided early notification to allow the sleeping occupants time to safely exit the structure and make a prompt notification to 911. This single smoke detector not only saved lives, but also allowed the fire department to attack the fire before destroying both the structure and personal belongings.” He estimated the fire department saved the owner of the residential structure from a $400K loss.

Assistant Chief Phil Higgins would like to remind the public that Smoke Alarms and Carbon Monoxide detectors are required on every level of the home and outside every sleeping area. These safety devices should be tested monthly. All structures with three or more living units are subject to annual fire safety inspections. For additional information or assistance, please call the Fairfield Fire Marshal’s Office at (203) 254-4720.