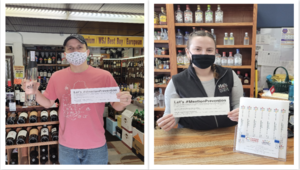 Fairfield, CT - Fairfield’s package stores are once again collaborating with the Fairfield CARES Community Coalition to prevent and reduce underage drinking in the community.  During the latter half of December and throughout the month of January, liquor stores will be distributing “consumer cards” that describe the risks of underage drinking and remind adults of CT’s social host laws.  To help parents have a conversation with their children about delaying alcohol use, the package stores are making available at their registers’ sleeves of Fairfield CARES’ “liquor locks”, stickers that can be put around the opening of a bottle, as demonstrated by Michael Urban of the Wine Zone, a liquor store located at the Hi-Ho Hotel on the Black Rock Turnpike, and Emma Wikman from Mo’s Wine & Spirits at 953 Post Road:

Fairfield CARES knows that parents want the best for their children.  Drinking is one activity that Fairfield CARES hopes parents encourage their children to delay until their adolescent brains are fully developed. “Talk They Hear You” is a media campaign that may be helpful to parents  and can be found at www.fairfieldct.org/fairfieldcares.