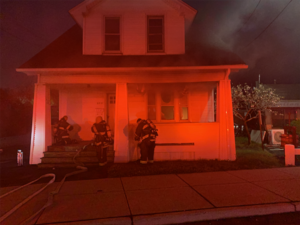 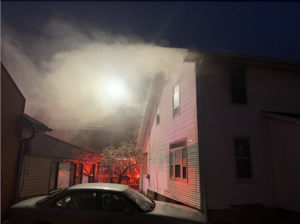 FAIRFIELD, CT, May 3, 2022: At approximately 5:06 AM, the Fairfield Regional Dispatch Center received a call from a passerby reporting smoke and fire coming from a house at 577 Kings Highway East in Fairfield. Car 3, Engine 2 and Ladder 2 arrived within four minutes of dispatch and reported fire showing from the first floor of a residential home. Engine 2, under the command of LT Robb Delmhorst, quickly attacked the fire while Ladder 2 conducted a search of the residence. A male victim was found on the first floor and removed by fire personnel to an awaiting AMR ambulance who initiated advanced life support treatment. The patient was transported to Bridgeport Hospital. His condition is unknown at the time of this release.

Incident Commander A/C Roger Caisse stated, “The notification of fire by a passerby contributed to the rapid response, rescue and extinguishment of this fire.” Residents are reminded to practice “Close before you doze” which involves closing all doors in the home before sleep as this can help create a barrier against deadly levels of toxic carbon monoxide, smoke and flames, and potentially save someone’s life.

The fire was brought under control in approximately 10 minutes of arrival. Fire damage to the residence is estimated to be over $250,000.00. The fire building was uninhabitable due to heavy smoke damage throughout and fire damage to the first floor. The Fire Marshal, A/C Phil Higgins, is investigating the cause of this fire. The last fire unit cleared Kings Highway East at 6:59AM.