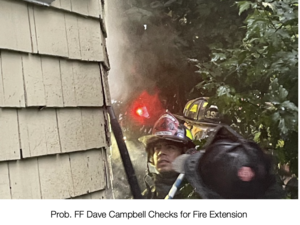 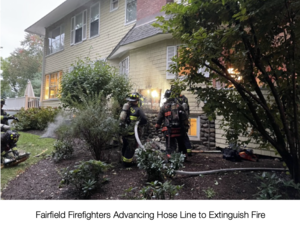 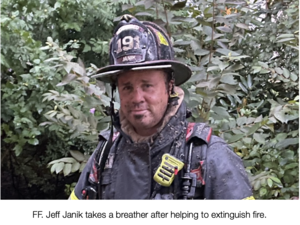 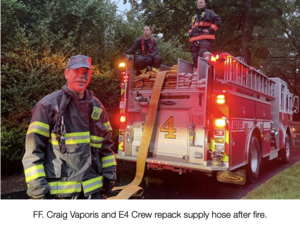 Fairfield, CT - At 6:55 AM on Wednesday October 5, the Fairfield Fire Department responded to a report of a fireplace fire that had spread to the roof of a home located on the Old Post Road across from Town Hall Green. E1 arrived on scene found the home owner attempting to extinguish a fire that was located inside a wall void on the side of the house with a garden hose.

According to the home owner, he had been burning a fire in the fireplace since yesterday. When he woke up this morning he smelled smoke and assumed the smell was from the smoldering fire. He added a few logs to stoke the fire and increase the draft up the chimney flue. A short time later the cable TV died. When he went outside to investigate he noticed that the side of his house behind the fireplace was on fire and the cable wire had burned through.

Lt. Greenhaw, the officer on Engine 1, directed his crew to advance an 1 3/4 hose line to the side of the building to extinguish the fire. He then ordered the rescue crew led by FF. Frank Zwierlien to check the inside the house for fire extension.

C-3 arrived on scene and took Asst. Chief George Gomola took command. He directed the crew of Tower Ladder 2 led by FF. Brian Madia to bring forcible entry tools and power saws to the fire side of the building and assist E1 crew with opening up the wall to extinguish the fire.

E2 crew led by Lt. Dennis Eannotti assisted Rescue 1 crew inside the dwelling. They used thermal imaging cameras to check for fire extension inside he walls and assisted and special meters to monitor the interior for carbon monoxide and other hazardous gases. A positive pressure ventiatilataion fan was used to remove low levels of carbon monoxide from the basement.

Additional firefighters rolled up carpets and removed area rugs to minimized damage. They used salvage covers to protect floors and furniture while they extinguished the fire in and around the fireplace.

According to Asst. Fire Chief George Gomola, the incident commander, “The quick notification by the home owner who called 911 immediately combined with the efficient and effective actions of our fire fighters prevented a major fire loss in our Town’s Historic District!” He concluded, “Our firefighters did a great job! They put the fire out as judiciously as possible all the while insuring that the secondary damage caused during firefighter was kept to a bare minimum.”

The Fairfield Fire Marshal’s Office responded to the scene to investigate cause and origin of the fire. The cause was determined to be cracked and deteriorated fire bricks and mortar in the 100 plus year old chimney which over time allowed the heat from the fire break down the molecules of the wooden beams until eventually they caught fire.

The Fairfield Fire Department and the Fairfield Fire Marshal recommend annual inspection of all fire place components include the firebox, the clean out, the chimney, and the flue by a trained professional. Annual or bi-annual cleaning of the chimney (depending on use.) is also vital to insure a safe home fireplace experience. In addition, working smoke detectors that are tested monthly are a must have in every home.