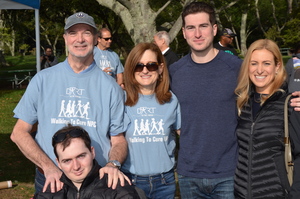 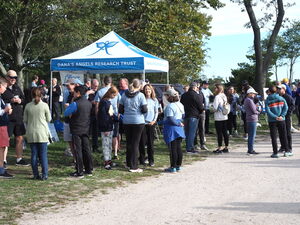 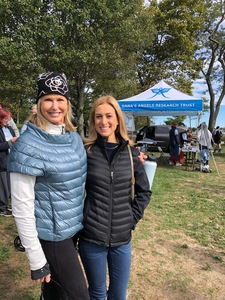 The fifth annual DART to The Finish charity walk benefitting Dana’s Angels Research Trust (DART), took place Saturday, September 24, 2022, at Greenwich Point Park in Old Greenwich, and virtually across the country. More than 300 participated and helpedraised more than $175,000, which will go towards supporting crucial research into better treatments, clinical trials and genetic testing for Niemann Pick type C disease (NPC), a very rare childhood disease that is often referred to as Childhood Alzheimer’s.

“What a beautiful day we had for our fifth annual DART to The Finish charity walk,” said Andrea Marella, co-founder of DART. “We want to thank everyone who walked with us, both in-person and virtually, to help us raise funds for finding better treatments for NPC. This year has had a lot of progress with potentially moving two life-saving treatments forward with the FDA and the funds raised at this walk will help further research on these and other potential treatments for children impacted by NPC."

Dana’s Angels Research Trust was founded in 2002 by Andrea and Phil Marella of Greenwich, Connecticut, after two of their four children, Dana and Andrew, were diagnosed with Niemann-Pick type C disease (NPC). Dana sadly passed away in 2013 at age 19. But Andrew, who turned 23 in June, is doing better due to being enrolled in a clinical trial to slow the progression of the disease. Andrew is able to walk, talk and even holds a part time job at the Prospector Theater in Ridgefield,  Connecticut, something the Marella’s were only able to dream about for Andrew before DART started raising funds for potential treatments.

“DART has been solely focused on finding better treatments and ultimately a cure for NPC for the past 20 years,” said Phil Marella, co-founder of DART. “When our daughter Dana was first diagnosed, so little was known about NPC. There were no treatments, no clinical trials, no hope.  Most children with NPC passed away in their early teens. Today, with the help of DART, we have changed that picture. DART and its partners have spearheaded eight clinical drug trials and developed newborn blood tests for early diagnosis of NPC. The NPC community is currently working with the FDA on approving two of the treatments DART has helped fund, which have benefitted our son Andrew. In the U.S. alone, there are now 120 children enrolled in clinical trials and 50 more international patients. These advancements and progress have only been possible from the generous support of our wonderful DART community, here in Greenwich and throughout the world, who have come together to support funding that is truly saving lives.”

DART has been instrumental in being part of an NPC Therapy Accelerator program supporting the work of more than 12 companies currently developing treatments for the disease, two of which are in the later stages of regulatory review with the FDA. DART and the NPC community also launched the largest newborn pilot testing program in the United States — thanks to the leadership of Firefly Fund, a DART partner, its founders the Andrews family of Austin, Texas, and with financial assistance from the Ara Parseghian Fund, DART and others. The ScreenPlus testing is being led by pediatric genetic expert Dr. Melissa Wasserstein at The Children’s Hospital at Montifiore, in conjunction with the New York State Newborn Screening Program, and is screening 175,000 newborns. This is the largest newborn screening pilot study in the U.S., backed by $11.3 million in funding from the National Institutes of Health, industry sponsors and patient advocacy groups. It is the hope of the NPC community families, including the Marellas, Andrews and Parseghians, that other families will not have to go through the lengthy, complex journey to find a diagnosis, and that treatments and cures can be accelerated.

NPC is so rare that only about 200 children in the U.S. have been diagnosed with the disease. and only a few, including Andrew, live in Connecticut. This devastating genetic disorder robs a child of the ability to live a long, healthy life, often becoming fatal in the teenage years. But, DART is helping to change that fate. As a nonprofit organization, DART’s events like DART to the Finish, help raise funds to support pivotal NPC research — research that may also help millions suffering from Parkinson’s disease, HIV/Aids, Ebola, heart disease, stroke, Alzheimer’s disease and other disorders that appear to be related to cholesterol.

Dr. Cristin Davidson, a researcher at the NIH and a project manager for SOAR-NPC, who was a guest speaker at the DART to The Finish charity walk this year, noted that gene therapy is now being explored to see if it will benefit children with NPC. “There’s a lot of exciting work being done with cell and gene therapy and study results in mice have demonstrated that gene therapy may be an effective method for correcting the single faulty gene that causes Niemann-Pick type C disease,” said Dr. Davidson.

“The critical need for funding potential NPC treatments and research has never been more important than it is today,” noted Phil Marella. “NPC is a brutal disease, but we are excited about DART’s support of the NPC Therapy Accelerator program supporting the work of more than 12 companies currently developing treatments for the disease, two of which are in the later stages of regulatory review with the FDA."

Andrea Marella added, “This clinical trial and other research into NPC is made possible only through the generous donations of our friends, community and sponsors and through events like DART to The Finish. Holding the DART charity walk is our way of doing something fun and raising much-needed funds at the same time.”

To date, DART has raised more than $6 million that has gone toward the search for a better treatment and ultimately a cure for NPC. DART is particularly proud of its commitment as a founding member of a unique, collaborative drug development program called SOAR-NPC or Support Of Accelerated Research. Working with other NPC families and research institutions, SOAR’s collaborators have four clinical trials already to their credit.