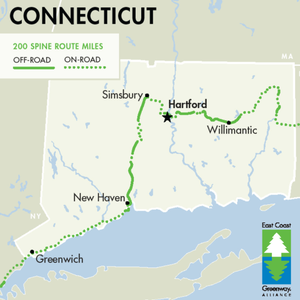 The Connecticut Department of Energy and Environmental Protection (DEEP) and the Connecticut Greenways Council today announced that they are now soliciting nominations for official state greenway designations.

Greenways are an integral part of any community, offering recreational opportunities, providing alternative transportation options, helping to preserve the environment, and supporting economic development.  Greenways can make a community a more attractive place to live by connecting living spaces with the environment, and they preserve history and cultivate town pride.

An official designation by the Greenways Council recognizes a greenway as an open space that not only meets the definition of a greenway, but also enhances the community and is supported by local government initiatives.  Designated greenways, both for recreation and resource protection, will be listed in a subsequent revision of the State Plan of Conservation and Development and may receive increased consideration for a variety of grants. There are currently 77 designated greenways in Connecticut.

The deadline for submission of nominations is April 30, 2021.

The nomination form is available as a word document or a PDF.  The preferred method for submission of completed nomination forms is by e-mail to This email address is being protected from spambots. You need JavaScript enabled to view it. , and digital photos and maps are preferred (digital photos of hard copy maps are acceptable).  Nominations may also be submitted on CD or other electronic storage device and can be mailed to Laurie Giannotti, CT DEEP, 79 Elm Street, Hartford, CT 06106-5127.