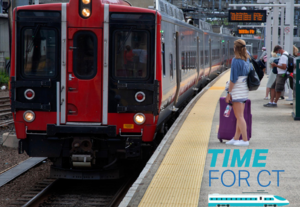 Additionally, substantial infrastructure and safety improvements on the Waterbury Branch Line allow for seven new weekday trains to be added to the schedule, increasing the number of weekday trains from 15 to 22 – a 47% increase. There will be four new southbound trains and three new northbound trains running weekdays. With these added trains, service begins earlier in the morning in both directions and operates more frequently in off-peak hours, providing more options to riders in the Naugatuck Valley.

“As more people return to rail service, they want faster trains, more options, and increased services,” Governor Lamont said. “This is all part of the TIME FOR CT initiative, and we are delivering on our promise of improving rail service in Connecticut. These express trains provide the fastest trips in a decade between New Haven and Grand Central. With a nearly 50% increase in service on the Waterbury Branch Line, we are showing a renewed commitment to improving and expanding rail service throughout the Naugatuck Valley.”

Governor Lamont’s recent budgets included funding for these new express trains and the expanded Waterbury Branch Line train services. The Connecticut Department of Transportation worked closely with Metro-North to identify available crews and equipment, operate test trains on the proposed schedule, and design a new operating package before the express trains came into service. They have also worked on significant infrastructure improvements, including railroad tie replacements, signal installation, the installation of four passing tracks, and grade crossing repairs in 2021, allowing the new trains to come into service on the Waterbury Branch Line.

“Through Governor Lamont’s priorities outlined in TIME FOR CT, and with our strong partnership with Metro-North, we are bringing increased services, faster trains, and additional amenities to Connecticut’s rail passengers,” Commissioner Giulietti said. “With faster trains during peak hours and historic service levels, we are fulfilling the governor’s promise and vision for improved train service for riders throughout Connecticut.”

“Metro-North is proud of our excellent working relationship with the Connecticut Department of Transportation,” President Rinaldi said. “This partnership has helped bring faster service for customers who travel between Connecticut and Manhattan, and the highest level of service on the Waterbury Branch in history. As more riders return to the system, Metro-North is improving the attractiveness of our weekday service with more trains and seating capacity and faster trips.”

The requirement of wearing a mask on public transportation has been lifted and is no longer being enforced on Hartford Line, Shore Line East, and in rail facilities in Connecticut. Per current CDC guidelines, wearing a mask is strongly encouraged. Customers who feel sick should not use public transportation. New Haven Line services are operated by Metro-North and adhere to New York State mask guidelines. Visit new.mta.info for details on Metro-North’s current mask requirements prior to travel.

Information about all rail services in Connecticut is available at CTrail.com.