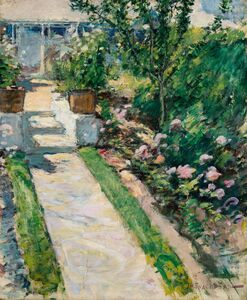 Life and Art: The Greenwich Paintings of John Henry Twachtman

An array of artworks by the celebrated American Impressionist artist John Henry Twachtman that depict his home and its surrounding landscape in Greenwich, Conn., where he lived from 1890 to 1899 will be presented by the Greenwich Historical Society. During this period Twachtman reached artistic maturity and produced many of his best-known works. Featuring 18 artworks on loan from museums and private collections, Life and Art presents a unique view into an era when Twachtman earned a reputation as the most original of the leading American Impressionists.

“This is one of our most important and ambitious exhibitions since our founding 90 years ago,” says Debra Mecky, Historical Society Executive Director and CEO. “We are honored to showcase the works of an artist who was instrumental in launching American Impressionism and who had a direct link to Greenwich. In addition to producing many highly acclaimed works here, he taught art classes in Cos Cob on the site of our campus and lodged in what is now the National Historic Landmark Bush-Holley House. Through his presence and that of his friends and students, Cos Cob became a cradle of American Impressionism.”

Known during his lifetime as a “painter’s painter” whose works were appreciated by fellow artists more than the general public, today Twachtman is regarded as among the most innovative American artists of the late-19th century. His paintings are present in many of the country’s leading museums and collections of American art.

Life and Art is curated byLisa N. Peters, Ph.D., an independent scholar and the author of John Henry Twachtman: An American Impressionist (High Museum of Art, Atlanta), as well as several other publications on Twachtman and American art. The exhibition is accompanied by a fully illustrated catalogue featuring an essay by Dr. Peters, incorporating insights gleaned from architectural study of Twachtman’s house, now privately owned.