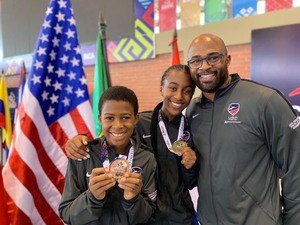 In her first international fencing competition, 13-year-old Madison Duckett of Greenwich brought home a gold medal at the Pan American Youth Championships for Team USA with her victory in the Pre-Cadet Women’s Saber event that took place in Cochabamba, Bolivia last month.

Madison, who just began competing on the national fencing circuit in 2018 and only started fencing in 2017, showed dominant form throughout the tournament which took place August 27-31, 2019. She went undefeated through the seeding rounds and won handily in the finals where she defeated Sofia Jimenez of Chile 10-2.

An eighth grader at Greenwich Country Day School, Madison shares her talent in fencing with her younger brother, 11-year-old Myles Duckett, a student at Eagle Hill School, who also earned a podium finish in Bolivia, taking Bronze in the Youth B Men’s Saber event. In addition, in only his first season competing, Myles claimed second place at the USA Fencing National Championships & July Challenge in the Youth-10 Saber event in Columbus, Ohio this past summer.

Madison and Myles are the daughter and son of Richard Duckett and Thasunda Brown Duckett, and siblings of Brendin, 22, and MacKenzie, 3. Both train at Tim Morehouse Fencing Club in Port Chester, N.Y. where they developed a passion for the sport and were able to take it to the next level.

“Madison’s gold medal and Myles’ bronze, plus the strong performance by others at the Pan American Youth Championships, make everyone at our club very proud,” said Tim Morehouse, U.S. Olympic Silver Medalist. “The future is very bright for all of them, and we look forward to winning more medals on the international stage and hopefully at the Olympics in the future.”

The success of Madison and Myles is the cornerstone of a historical 2019 season in which Tim Morehouse Fencing Club finished No.1 in the country in Youth Saber Fencing, No. 2 in the country overall at the US National Summer Championships and qualified its first fencer, Nicka Lortkipanidze of Mount Kisco, N.Y., to the Cadet World Championship team for Team USA.

Tim Morehouse Fencing Club is opening a new location in Greenwich to provide another quality club for area fencers. In addition to Port Chester, there are two locations in Manhattan and one in Larchmont. For more information, visit timmorehousefencing.com